Disorders of the shoulder region are common problems in both the general and working population. As many as one-third of all women and one-quarter of all men report feeling pain in the neck and shoulder every day or every other day. It is estimated that the prevalence of shoulder tendinitis in the general population is about 2%. Among male and female workers in the United States, the prevalence of shoulder tendinitis has been estimated to be as high as 8% among those exposed to highly repetitive or high-force hand motions, compared to about 1% for those without this type of musculoskeletal stress.

Figure 1. Schematic view of the skeletal parts of the shoulder-girdle. 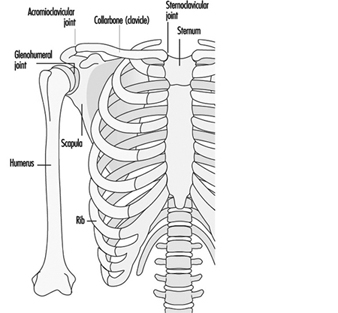 The arm represents about 5% of the total body weight, and its centre of gravity is about midway down between the glenohumeral joint and the wrist. When the arm is raised and bent either away from or towards the body (abduction or flexion), a lever is created in which the distance from the centre of gravity increases, and hence the twisting force, and the loading torque, on the glenohumeral joint increases. The rate at which the torque increases, however, is not simply directly proportional to the angle at which the arm is bent, because the mathematical function which describes the biomechanical forces is not linear but is rather a sine function of the abduction angle. The torque will decrease only by about 10% if the flexion or abduction angle is decreased from 90 to 60 degrees. However, if the angle is decreased from 60 to 30 degrees, torque is reduced by as much as 50%.

The flexion strength in the glenohumeral joint is about 40 to 50 Nm for women and about 80 to 100 Nm for men. When the arm is held straight out (90-degree forward flexion) and no external load is placed on the arm—that is, the person is not holding anything or using the arm to exert a force—the static load is still about 15 to 20% of the maximal voluntary capacity (MVC) for women and about 10 to 15% MVC for men. If a tool weighing 1 kg is held in the hand with an arm extended, the corresponding load in the shoulder would be about 80% of the MVC for women, as illustrated in figure 2.

Figure 2. Female and male strength showing the results of holding a 1 kilogramme tool in the hand with the arm held straight at different angles of shoulder flexion. 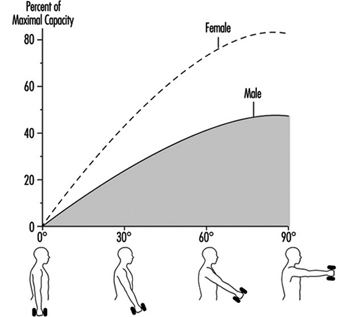 Rotator cuff muscles are engaged in any movement of the glenohumeral joint, which is to say any movement of the arm. The rotator cuff muscles originate from the shoulder blade, and their tendons are arranged around the humerus in the form of a cuff, from which their name is derived. The four rotator cuff muscles are the supraspinate, the infraspinate, the teres minor and the subscapularis muscle. These muscles function as ligaments in the glenohumeral joint and also keep the humeral head against the shoulder-blade. A rupture of the rotator cuff (e.g., of the supraspinous tendon) will cause a reduction in abduction strength, particularly involving those positions where the arm is bent away from the body. When the function of the deltoid muscles is lost, the abduction strength can be reduced by as much as 50%, regardless of the angle at which the arm is being bent.

Tendinitis and tenosynovitis are inflammations of a tendon and the synovial membrane of a tendon sheath. The tendons to the rotator cuff muscles (supraspinatus, infraspinatus, subscapularis, and teres minor muscles) and the long head of the biceps brachii are common sites for inflammation in the shoulder. Large movements of the tendons are involved at these locations. During elevation, as the tendons pass to the shoulder joint and under the bony structure there (the coraco-acromial arch), they may be impinged upon, and inflammation may result. These disorders are sometimes termed impingement syndromes. Inflammation of a tendon may be part of a general inflammatory disease, such as in rheumatoid arthritis, but also may be caused by local inflammation which results from mechanical irritation and friction.

Shoulder joint and acromioclavicular joint osteoarthritis, OA, are degenerative changes of cartilage and bone in the joints and intervertebral discs.

Studies of industrial workers in the United States have shown there to be a prevalence of 7.8% of shoulder tendinitis and degenerative joint disease (shoulder) of cumulative trauma disorders (CTDs) among workers whose tasks involved exerting force or repetitive motions, or both, on the wrist and hands. In one study, female students performing repetitive shoulder flexion developed reversible shoulder tendinitis. They developed the condition when the flexion rate, over the course of one hour, was 15 forward flexions per minute and the angle of flexion was between 0 and 90 degrees. Boarding, folding and sewing workers suffered about twice as much shoulder tendinitis as did knitting workers. Among professional baseball pitchers, approximately 10% have experienced shoulder tendinitis. A survey of swimmers in Canadian swimming clubs found that 15% of the swimmers reported having significant shoulder disability, primarily due to impingement. The problem was particularly related to the butterfly and freestyle strokes. Tendinitis of the biceps brachii was found in 11% of the 84 best tennis players in the world.

Another study showed that shoulder joint osteoarthritis was more common in dentists than among farmers, but the ergonomic exposure related to shoulder joint OA has not been identified. An increased risk for acromioclavicular OA has been reported among construction workers. Heavy lifting and handling of heavy tools with hand-arm vibration have been suggested as the exposure related to acromioclavicular joint OA.

Mechanisms and Risk Factors of Disease

Tendon degeneration is often the predisposing factor for development of shoulder tendinitis. Such degeneration of the tendon can be caused by impairment of circulation to the tendon so that metabolism is disrupted. Mechanical stress may also be a cause. Cell death within the tendon, which forms debris and in which calcium may deposit, may be the initial form of degeneration. The tendons to the supraspinatus, the biceps brachii (long head) and the upper parts of the infraspinatus muscles have a zone in which there are no blood vessels (avascularity), and it is in this area that signs of degeneration, including cell death, calcium deposits and microscopic ruptures, are predominantly located. When blood circulation is impaired, such as through compression and static load on the shoulder tendons, then degeneration can be accelerated because normal body maintenance will not be functioning optimally.

Compression of the tendons occurs when the arm is elevated. A process that is often referred to as impingement involves forcing the tendons through the bony passageways of the shoulder, as illustrated in figure 3. Compression of the rotator cuff tendons (especially the supraspinatus tendon) results because the space between the humeral head and the tight coracoacromial arch is narrow. People who are suffering with long-term disability due to chronic bursitis or complete or partial tears of the rotator cuff tendons or biceps brachii usually also have impingement syndrome. 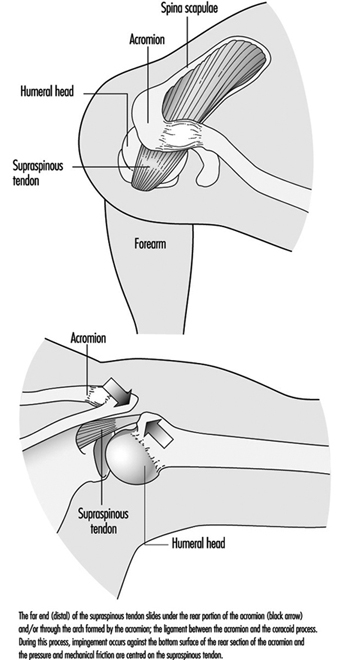 Figure 4. Raising the arm to different elevations and at different angles exerts different intramuscular pressures on the supraspinous muscle. 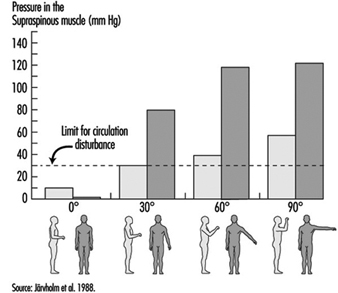 Because of these biomechanical effects, it is not surprising to find a high risk of shoulder tendon injuries among those who are involved in activities that require static contractions of the supraspinatus muscle or repetitive shoulder forward flexions or abductions. Welders, steel-platers and sewers are among the occupational groups whose work involves static tension of these muscles. Assembly line workers in the automotive industry, painters, carpenters and athletes such as swimmers are other occupational groups in which repetitive shoulder joint movements are performed.

In the degenerated tendon, exertion may trigger an inflammatory response to the debris of dead cells, resulting in an active tendinitis. Also, infection (e.g., viral, urogenital) or systemic inflammation may predispose an individual to reactive tendinitis in the shoulder. One hypothesis is that an infection, which makes the immune system active, increases the possibility of a foreign body response to the degenerative structures in the tendon.

The pathogenesis of osteoarthrosis, OA, is not known. Primary (idiopathic) OA is the most common diagnosis in absence of predisposing factors such as previous fractures. If predisposing factors exist, the OA is termed secondary. There are disputes between those who claim (primary) OA to be a metabolic or genetic disorder and those who claim that cumulative mechanical trauma also may play a part in the pathogenesis of primary OA. Microfractures due to sudden impact or repetitive impact loading may be one pathogenic mechanism for load-related OA.

In this section, non-medical management of shoulder disorders is considered. A change of workplace design or change of work task is necessary if the tendinitis is considered to be due to high local shoulder load. A history of shoulder tendinitis makes a worker doing repetitive or overhead work susceptible to a relapse of tendinitis. Loading of the osteoarthritic joint should be minimized by ergonomic optimization of work.

Prevention of work-related musculoskeletal disorders in the shoulder can be achieved by improving work postures, motions, material handling and work organization, and eliminating external hazardous factors such as hand-arm vibration or whole body vibration. A methodology that may be advantageous in improving ergonomic working conditions is participatory ergonomics, taking a macro-ergonomic approach.