The priority objective of occupational and environmental toxicology is to improve the prevention or substantial limitation of health effects of exposure to hazardous agents in the general and occupational environments. To this end systems have been developed for quantitative risk assessment related to a given exposure (see the section “Regulatory toxicology”).

The effects of a chemical on particular systems and organs are related to the magnitude of exposure and whether exposure is acute or chronic. In view of the diversity of toxic effects even within one system or organ, a uniform philosophy concerning the critical organ and critical effect has been proposed for the purpose of risk assessment and development of health-based recommended concentration limits of toxic substances in different environmental media.

From the point of view of preventive medicine, it is of particular importance to identify early adverse effects, based on the general assumption that preventing or limiting early effects may prevent more severe health effects from developing.

Such an approach has been applied to heavy metals. Although heavy metals, such as lead, cadmium and mercury, belong to a specific group of toxic substances where the chronic effect of activity is dependent on their accumulation in the organs, the definitions presented below were published by the Task Group on Metal Toxicity (Nordberg 1976).

The definition of the critical organ as proposed by the Task Group on Metal Toxicity has been adopted with a slight modification: the word metal has been replaced with the expression potentially toxic substance (Duffus 1993).

Whether a given organ or system is regarded as critical depends not only on the toxicomechanics of the hazardous agent but also on the route of absorption and the exposed population.

The biological meaning of subcritical effect is sometimes not known; it may stand for exposure biomarker, adaptation index or a critical effect precursor (see “Toxicology test methods: Biomarkers”). The latter possibility can be particularly significant in view of prophylactic activities.

Table 1 displays examples of critical organs and effects for different chemicals. In chronic environmental exposure to cadmium, where the route of absorption is of minor importance (cadmium air concentrations range from 10 to 20μg/m3 in the urban and 1 to 2 μg/m3 in the rural areas), the critical organ is the kidney. In the occupational setting where the TLV reaches 50μg/m3 and inhalation constitutes the main route of exposure, two organs, lung and kidney, are regarded as critical.

For lead, the critical organs in adults are the haemopoietic and peripheral nervous systems, where the critical effects (e.g., elevated free erythrocyte protoporphyrin concentration (FEP), increased excretion of delta-aminolevulinic acid in urine, or impaired peripheral nerve conduction) manifest when the blood lead level (an index of lead absorption in the system) approaches 200 to 300μg/l. In small children the critical organ is the central nervous system (CNS), and the symptoms of dysfunction detected with the use of a psychological test battery have been found to appear in the examined populations even at concentrations in the range of about 100μg/l Pb in blood.

A number of other definitions have been formulated which may better reflect the meaning of the notion. According to WHO (1989), the critical effect has been defined as “the first adverse effect which appears when the threshold (critical) concentration or dose is reached in the critical organ. Adverse effects, such as cancer, with no defined threshold concentration are often regarded as critical. Decision on whether an effect is critical is a matter of expert judgement.” In the International Programme on Chemical Safety (IPCS) guidelines for developing Environmental Health Criteria Documents, the critical effect is described as “the adverse effect judged to be most appropriate for determining the tolerable intake”. The latter definition has been formulated directly for the purpose of evaluating the health-based exposure limits in the general environment. In this context the most essential seems to be determining which effect can be regarded as an adverse effect. Following current terminology, the adverse effect is the “change in morphology, physiology, growth, development or lifespan of an organism which results in impairment of the capacity to compensate for additional stress or increase in susceptibility to the harmful effects of other environmental influences. Decision on whether or not any effect is adverse requires expert judgement.”

Figure 1 displays hypothetical dose-response curves for different effects. In the case of exposure to lead, A can represent a subcritical effect (inhibition of erythrocyte ALA-dehydratase), B the critical effect (an increase in erythrocyte zinc protoporphyrin or increase in the excretion of delta-aminolevulinic acid, C the clinical effect (anaemia) and D the fatal effect (death). For lead exposure there is abundant evidence illustrating how particular effects of exposure are dependent on lead concentration in blood (practical counterpart of the dose), either in the form of the dose-response relationship or in relation to different variables (sex, age, etc.). Determining the critical effects and the dose-response relationship for such effects in humans makes it possible to predict the frequency of a given effect for a given dose or its counterpart (concentration in biological material) in a certain population. 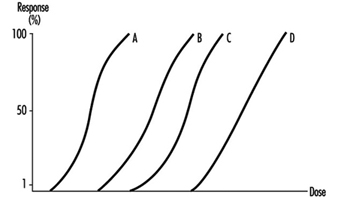 The critical effects can be of two types: those considered to have a threshold and those for which there may be some risk at any exposure level (non-threshold, genotoxic carcinogens and germ mutagens). Whenever possible, appropriate human data should be used as a basis for the risk assessment. In order to determine the threshold effects for the general population, assumptions concerning the exposure level (tolerable intake, biomarkers of exposure) have to be made such that the frequency of the critical effect in the population exposed to a given hazardous agent corresponds to the frequency of that effect in the general population. In lead exposure, the maximum recommended blood lead concentration for the general population (200μg/l, median below 100μg/l) (WHO 1987) is practically below the threshold value for the assumed critical effect—the elevated free erythrocyte protoporphyrin level, although it is not below the level associated with effects on the CNS in children or blood pressure in adults. In general, if data from well-conducted human population studies defining a no observed adverse effect level are the basis for safety evaluation, then the uncertainty factor of ten has been considered appropriate. In the case of occupational exposure the critical effects may refer to a certain part of the population (e.g. 10%). Accordingly, in occupational lead exposure the recommended health-based concentration of blood lead has been adopted to be 400mg/l in men where a 10% response level for ALA-U of 5mg/l occurred at PbB concentrations of about 300 to 400mg/l. For the occupational exposure to cadmium (assuming the increased urinary excretion of low-weight proteins to be the critical effect), the level of 200ppm cadmium in renal cortex has been regarded as the admissible value, for this effect has been observed in 10% of the exposed population. Both these values are under consideration for lowering, in many countries, at the present time (i.e.,1996).

There is no clear consensus on appropriate methodology for the risk assessment of chemicals for which the critical effect may not have a threshold, such as genotoxic carcinogens. A number of approaches based largely on characterization of the dose- response relationship have been adopted for the assessment of such effects. Owing to the lack of socio-political acceptance of health risk caused by carcinogens in such documents as the Air Quality Guidelines for Europe (WHO 1987), only the values such as the unit lifetime risk (i.e., the risk associated with lifetime exposure to 1μg/m3 of the hazardous agent) are presented for non-threshold effects (see “Regulatory toxicology”).

Presently, the basic step in undertaking activities for risk assessment is determining the critical organ and critical effects. The definitions of both the critical and adverse effect reflect the responsibility of deciding which of the effects within a given organ or system should be regarded as critical, and this is directly related to the subsequent determination of recommended values for a given chemical in the general environment—for example, Air Quality Guidelines for Europe (WHO 1987) or health-based limits in occupational exposure (WHO 1980). Determining the critical effect from within the range of subcritical effects may lead to a situation where the recommended limits on toxic chemicals concentration in the general or occupational environment may be in practice impossible to maintain. Regarding as critical an effect that may overlap the early clinical effects may bring about the adoption of the values for which adverse effects may develop in some part of the population. The decision whether or not a given effect should be considered critical remains the responsibility of expert groups who specialize in toxicity and risk assessment.

help on how to format text