Musculoskeletal Disorders Among Fishermen and Workers in the Fish Processing Industry

Figure 1. Manual handling of fish in a fish-packing plant in Thailand 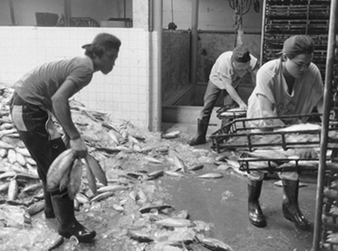 In 1985, the World Health Organization (WHO) issued the following statement: “Work-related diseases are defined as multifactorial, where the work environment and the performance of work contribute significantly; but as one of a number of factors to the causation of disease” (WHO 1985). There are, however, no internationally accepted criteria for the causes of work-related musculoskeletal disorders. Work-related musculoskeletal disorders appear in both developing and developed countries. They have not disappeared despite the development of new technologies permitting machines and computers to take over what was previously manual work (Kolare 1993).

Work aboard vessels is physically and mentally demanding. Most of the well-known risk factors for musculoskeletal disorders mentioned above are often present in the fishermen’s work situation and organization.

There are not many published studies on musculoskeletal disorders among workers in fish processing. There is a long tradition of female domination in the job of cutting and trimming the fillets in the fish-processing industry. Results from Icelandic, Swedish and Taiwanese studies show that female workers in the fish-processing industry had a higher prevalence of symptoms of musculoskeletal disorders of the neck or shoulders than women who had more varied jobs (Ólafsdóttir and Rafnsson1997; Ohlsson et al. 1994; Chiang et al. 1993). These symptoms were thought to be causally related to the highly repetitive tasks with a short cycle time of less than 30 seconds. Work with highly repetitive tasks without the possibility of rotation between different jobs is a high risk factor. Chiang and co-workers (1993) studied workers in the fish-processing industry (men and women) and found a higher prevalence of symptoms of the upper limbs among those with jobs involving high repetitiveness or forceful movements, as compared to those in the same factories who had jobs with low repetitiveness and low-force movements.

As mentioned above, musculoskeletal disorders have not disappeared despite the development of new technologies. The flow line is an example of one new technique which has been introduced in the fish-processing industry ashore and on board larger processing vessels. The flow line consists of a system of conveyor belts which transport the fish through decapitating and filleting machines to the workers who seize each fillet and cut and trim it with a knife. Other conveyor belts transport the fish to the packing station, after which the fish is quick-frozen. The flow line has changed the prevalence of musculoskeletal symptoms among women working in fish-filleting plants. After the introduction of the flow line, the prevalence of symptoms of the upper limbs increased while the prevalence of symptoms of the lower limbs decreased (Ólafsdóttir and Rafnsson 1997).

In order to develop a strategy for their prevention it is important to understand the causes, mechanisms, prognosis and prevention of musculoskeletal disorders (Kolare et al. 1993). The disorders cannot be prevented by new technologies exclusively. The whole working environment, including the work organization, has to be taken into consideration.