The Relevance of Forest Fires

One important task for forest management is the protection of the forest resource base.

Out of many sources of attacks against the forest, fire is often the most dangerous. This danger is also a real threat for the people living inside or adjacent to the forest area. Each year thousands of people lose their homes due to wildfires, and hundreds of people die in these accidents; additionally tens of thousands of domestic animals perish. Fire destroys agricultural crops and leads to soil erosion, which in the long run is even more disastrous than the accidents described before. When the soil is barren after the fire, and heavy rains soak the soil, huge mud- or landslides can occur.

It is estimated that every year:

More than 90% of all this burning is caused by human activity. Therefore, it is quite clear that fire prevention and control should receive top priority among forest management activities.

The activities in forest fire management can be divided into three different categories with different objectives:

Fire detection safety is mostly a question of safe driving of vehicles, unless aircraft are used. Fixed-wing aircraft are especially vulnerable to strong uplifting air streams caused by the hot air and gases. Each year tens of air crews are lost due to pilot errors, especially in mountainous conditions.

Fire suppression, or actual fighting of the fire, is a very specialized operation. It has to be organized like a military operation, because negligence, non-obedience and other human errors may not only endanger the firefighter, but may also cause the death of many others as well as extensive property damage. The whole organization has to be clearly structured with good coordination between forestry staff, emergency services, fire brigades, police and, in large fires, the armed forces. There has to be a single line of command, centrally and onsite.

Fire suppression mostly involves the establishment or maintenance of a network of fire-breaks. These are typically 10- to 20-metre-wide strips cleared of all vegetation and burnable material. Accidents are mostly caused by cutting tools.

Major wildfires are, of course, the most hazardous, but similar problems arise with prescribed burning or “cold fires”, when mild burns are allowed to reduce the amount of inflammable material without damaging the vegetation. The same precautions apply in all cases.

Detecting the fire early, when it is still weak, will make its control easier and safer. Previously, detection was based on observations from the ground. Now, however, infrared and microwave equipment attached to aircraft can detect an early fire. The information is relayed to a computer on the ground, which can process it and give the precise location and temperature of the fire, even when there are clouds. This allows ground crews and/or smoke jumpers to attack the fire before it spreads widely.

Many rules are applicable to the firefighter, who may be a forest worker, a volunteer from the community, a government employee or a member of a military unit ordered to the area. The most important is: never go to fight a fire without your own personal cutting tool. The only way to escape the fire may be to use the tool to remove one of the components of the “fire triangle”, as shown in figure 1. The quality of that tool is critical: if it breaks, the fire fighter may lose his or her life. This also puts a very special emphasis on the quality of the tool; bluntly put, if the metal part of the tool breaks, the fire-fighter may lose his or her life. Forest firefighter safety equipment is shown in figure 2. 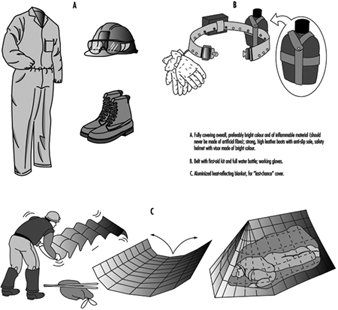 The preparation of fire breaks during an actual fire is especially dangerous because of the urgency of controlling the advance of the fire. The danger may be multiplied by poor visibility and changing wind direction. In fighting fires with heavy smoke (e.g., peat-land fires), lessons learned from such a fire in Finland in 1995 include:

The problems are related to poor visibility and changing wind directions.

When an advancing fire threatens dwellings, the inhabitants may have to be evacuated. This presents an opportunity for thieves and vandals, and calls for diligent policing activities.

The most dangerous work task is the making of backfires: hurriedly cutting through the trees and underbrush to form a path parallel to the advancing line of fire and setting it afire at just the right moment to produce a strong draught of air heading toward the advancing fire, so that the two fires meet. The draught from the advancing fire is caused by the need of the advancing fire to pull oxygen from all sides of the fire. It is very clear that if the timing fails, then the whole crew will be engulfed by strong smoke and exhausting heat and then will suffer a lack of oxygen. Only the most experienced people should set backfires, and they should prepare escape routes in advance to either side of the fire. This backfiring system should always be practised in advance of the fire season; this practice should include the use of equipment like torches for lighting the backfire. Ordinary matches are too slow!

As a last effort for self-preservation, a firefighter can scrape all burning materials in a 5 m diameter, dig a pit in the centre, cover him or herself with soil, soak headgear or jacket and put it over his or her head. Oxygen is often available only at 1 to 2 centimetres from ground level.

The use of aircraft for fighting fires is not new (the dangers in aviation are described elsewhere in this Encyclopaedia). There are, however, some activities that are very dangerous for the ground crew in a forest fire. The first is related to the official sign language used in aircraft operations—this has to be practised during training.

The second is how to mark all areas where the aircraft is going to load water for its tanks. To make this operation as safe as possible, these areas should be marked off with floating buoys to obviate the pilot’s need to use guesswork.

The third important matter is to keep constant radio contact between the ground crew and the aircraft as it prepares to release its water. The release from small heli-buckets of 500 to 800 litres is not that dangerous. Large helicopters, however, like the MI-6, carry 2,500 litres, while the C-120 aircraft takes 8,000 litres and the IL-76 can drop 42,000 litres in one sweep. If, by chance, one of these big loads of water lands on crew members on the ground, the impact could kill them.

One essential requirement in firefighting is to line up all firefighters, villagers and forest workers to organize joint firefighting exercises before the beginning of fire season. This is the best way to secure successful and safe firefighting. At the same time, all the work functions of the various levels of command should be practised in the field.

The selected fire chief and leaders should be the ones with the best knowledge of local conditions and of government and private organizations. It is obviously dangerous to assign somebody either too high up the hierarchy (no local knowledge) or too low down the hierarchy (often lacking authority).