Pulping is the process by which the bonds within the wood structure are ruptured either mechanically or chemically. Chemical pulps can be produced by either alkaline (i.e., sulphate or kraft) or acidic (i.e., sulphite) processes. The highest proportion of pulp is produced by the sulphate method, followed by mechanical (including semi-chemical, thermomechanical and mechanical) and sulphite methods (figure 1). Pulping processes differ in the yield and quality of the product, and for chemical methods, in the chemicals used and the proportion that can be recovered for reuse. 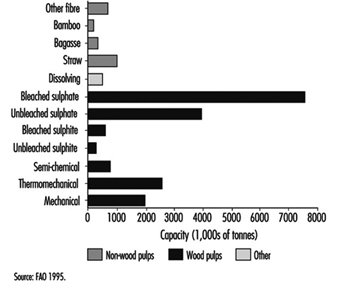 Mechanical pulps are produced by grinding wood against a stone or between metal plates, thereby separating the wood into individual fibres. The shearing action breaks cellulose fibres, so that the resulting pulp is weaker than chemically separated pulps. The lignin connecting cellulose to hemicellulose is not dissolved; it merely softens, allowing the fibres to be ground out of the wood matrix. The yield (proportion of original wood in pulp) is usually greater than 85%. Some mechanical pulping methods also use chemicals (i.e., the chemi-mechanical pulps); their yields are lower since they remove more of the non-cellulosic materials.

In stone groundwood pulping (SGW), the oldest and historically most common mechanical method, fibres are removed from short logs by pressing them against a rotating abrasive cylinder. In refiner mechanical pulping (RMP, figure 2), which gained popularity after it became commercially viable in the 1960s, wood chips or sawdust are fed through the centre of a disc refiner, where they are shredded into finer pieces as they are pushed out through progressively narrower bars and grooves. (In figure 2, the refiners are enclosed in the middle of the picture and their large motors are on the left. Chips are supplied though the large diameter pipes, and pulp exits the smaller ones.) A modification of RMP is thermomechanical pulping (TMP), in which the chips are steamed before and during refining, usually under pressure. Chemical pulps are produced by chemically dissolving the lignin between the wood fibres, thereby enabling the fibres to separate relatively undamaged. Because most of the non-fibrous wood components are removed in these processes, yields are usually in the order of 40 to 55%.

In chemical pulping, chips and chemicals in aqueous solution are cooked together in a pressure vessel (digester, figure 3) which can be operated on a batch or continuous basis. In batch cooking, the digester is filled with chips through a top opening, the digestion chemicals are added, and the contents cooked at elevated temperature and pressure. Once the cook is complete, the pressure is released, “blowing” the delignified pulp out of the digester and into a holding tank. The sequence is then repeated. In continuous digesting, pre-steamed chips are fed into the digester at a continuous rate. Chips and chemicals are mixed together in the impregnation zone at the top of the digester and then proceed through the upper cooking zone, the lower cooking zone, and the washing zone before being blown into the blow tank. 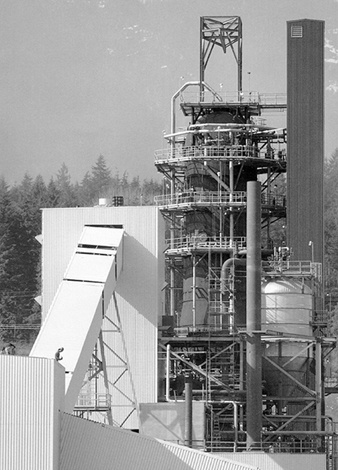 The digesting chemicals are recovered in most chemical pulping operations today. The principal objectives are to recover and reconstitute digestion chemicals from the spent cooking liquor, and to recover heat energy by burning the dissolved organic material from the wood. The resulting steam and electricity supplies some, if not all, of the mill’s energy needs.

The sulphate process produces a stronger, darker pulp than other methods and requires chemical recovery to compete economically. The method evolved from soda pulping (which uses only sodium hydroxide for digestion) and began to gain prominence in the industry from the 1930s to 1950s with the development of chlorine dioxide bleaching and chemical recovery processes, which also produced steam and power for the mill. The development of corrosion-proof metals, such as stainless steel, to handle the acidic and alkaline pulp mill environments also played a role.

The cooking mixture (white liquor) is sodium hydroxide (NaOH, “caustic”) and sodium sulphide (Na2S). Modern kraft pulping is usually carried out in continuous digesters often lined with stainless steel (figure 3). The temperature of the digester is raised slowly to approximately 170°C and held at that level for approximately 3 to 4 hours. The pulp (called brown stock because of its colour) is screened to remove uncooked wood, washed to remove the spent cooking mixture (now black liquor), and sent either to the bleach plant or to the pulp machine room. Uncooked wood is either returned to the digester or sent to the power boiler to be burned.

The black liquor collected from the digester and brown stock washers contains dissolved organic material whose exact chemical composition depends on the wood species pulped and the cooking conditions. The liquor is concentrated in evaporators until it contains less than 40% water, then sprayed into the recovery boiler. The organic component is consumed as fuel, generating heat which is recovered in the upper section of the furnace as high-temperature steam. The unburned inorganic component collects at the bottom of the boiler as a molten smelt. The smelt flows out of the furnace and is dissolved in a weak caustic solution, producing “green liquor” containing primarily dissolved Na2S and sodium carbonate (Na2CO3). This liquor is pumped to a recausticizing plant, where it is clarified, then reacted with slaked lime
(Ca(OH)2), forming NaOH and calcium carbonate (CaCO3). The white liquor is filtered and stored for subsequent use. CaCO3 is sent to a lime kiln, where it is heated to regenerate lime (CaO).

Sulphite pulping dominated the industry from the late 1800s to the mid-1900s, but the method used during this era was limited by the types of wood which could be pulped and the pollution created by discharging untreated waste cooking liquor into waterways. Newer methods have overcome many of these problems, but sulphite pulping is now a small segment of the pulp market. Although sulphite pulping usually uses acid digestion, both neutral and basic variations exist.

The cooking liquor of sulphurous acid (H2SO3) and bisulphite ion (HSO3–) is prepared on-site. Elemental sulphur is burned to produce sulphur dioxide (SO2), which is passed up through an absorption tower that contains water and one of four alkaline bases (CaCO3, the original sulphite base, Na2CO3, magnesium hydroxide (Mg(OH)2) or ammonium hydroxide (NH4OH)) which produce the acid and ion and control their proportions. Sulphite pulping is usually carried out in brick-lined batch digesters. To avoid unwanted reactions, the digester is heated slowly to a maximum temperature of 130 to 140°C and the chips are cooked for a long time (6 to 8 hours). As the digester pressure increases, gaseous sulphur dioxide (SO2) is bled off and remixed with the raw cooking acid. When approximately 1 to 1.5 hours of cooking time remains, heating is discontinued and the pressure is decreased by bleeding off gas and steam. The pulp is blown into a holding tank, then washed and screened.

The spent digestion mixture, called red liquor, can be used for heat and chemical recovery for all but calcium-bisulphite-base operations. For ammonia-base sulphite pulping, the dilute red liquor is first stripped to remove residual SO2, then concentrated and burned. The flue gas containing SO2 is cooled and passed through an absorption tower where fresh ammonia combines with it to regenerate the cooking liquor. Finally, the liquor is filtered, fortified with fresh SO2 and stored. The ammonia cannot be recovered because it is converted into nitrogen and water in the recovery boiler.

In magnesium-base sulphite pulping, burning the concentrated pulping liquor gives magnesium oxide (MgO) and SO2, which are easily recovered. No smelt is produced in this process; rather MgO is collected from the flue gas and slaked with water to produce magnesium hydroxide (Mg(OH)2). SO2 is cooled and combined with the Mg(OH)2 in an absorption tower to reconstitute the cooking liquor. The magnesium bisulphite (Mg(HSO3)2) is then fortified with fresh SO2 and stored. Recovery of 80 to 90% of the cooking chemicals is possible.

Recovery of sodium-base sulphite cooking liquor is more complicated. Concentrated spent liquor is incinerated, and approximately 50% of the sulphur is converted into SO2. The remainder of the sodium and sulphur is collected at the bottom of the recovery boiler as a smelt of Na2S and Na2CO3. The smelt is dissolved to produce green liquor, which is converted to sodium bisulphite (NaHSO3) in several steps. The NaHSO3 is fortified and stored. The regeneration process produces reduced sulphur gases, in particular hydrogen sulphide (H2S).