Adapted from 3rd edition, Encyclopaedia of Occupational Health and Safety.

The business of the chemical industry is to change the chemical structure of natural materials in order to derive products of value to other industries or in daily life. Chemicals are produced from these raw materials-principally minerals, metals and hydrocarbons-in a series of processing steps. Further treatment, such as mixing and blending, is often required to convert them into end-products (e.g., paints, adhesives, medicines and cosmetics). Thus the chemical industry covers a much wider field than what is usually called “chemicals” since it also includes such products as artificial fibres, resins, soaps, paints, photographic films and more.

Chemicals fall into two main classes: organic and inorganic. Organic chemicals have a basic structure of carbon atoms, combined with hydrogen and other elements. Oil and gas are today the source of 90% of world organic chemical production, having largely replaced coal and vegetable and animal matter, the earlier raw materials. Inorganic chemicals are derived chiefly from mineral sources. Examples are sulphur, which is mined as such or extracted from ores, and chlorine, which is made from common salt.

The products of the chemical industry can be broadly divided into three groups, which correspond to the principal steps in manufacture: base chemicals (organic and inorganic) are normally manufactured on a large scale and are normally converted to other chemicals; intermediates are derived from base chemicals. Most intermediates require further processing in the chemical industry, but some, such as solvents, are used as they are; finished chemical products are made by further chemical processing. Some of these (drugs, cosmetics, soaps) are consumed as such; others, such as fibres, plastics, dyes and pigments, are processed still further.

The main sectors of the chemical industry are as follows:

In the International Standard Industrial Classification of All Economic Activities (ISIC) system, used by the United Nations to classify economic activity into ten major divisions, the chemical industry is classified as Division 35, one of the nine subdivisions of Major Division 3: Manufacturing. Division 35 is further subdivided into industrial chemicals (351), other chemicals (352), petroleum refineries (353), miscellaneous coal and petroleum products, e.g., asphalt (354), rubber products including tyres (355) and plastics processing (356).

In reporting chemical industry statistics each country normally uses its own classification system, and this can be misleading. Thus comparison between countries of total chemical industry performance cannot be based on national sources. However, international bodies like the Organization for Economic Cooperation and Development (OECD) and the United Nations normally supply data on the ISIC basis, though with a delay of about two years. 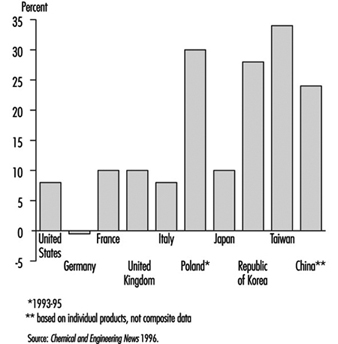