A diaphragm cell (see figure 1) is fed saturated salt brine into a compartment containing a titanium anode coated with salts of ruthenium and other metals. A plastic cell head collects the hot, wet chlorine gas produced at this anode. Suction by a compressor then draws the chlorine into a collection header for further processing consisting of cooling, drying and compression. Water and unreacted brine percolate through a porous diaphragm separator into the cathode compartment where water reacts at a steel cathode to produce sodium hydroxide (caustic soda) and hydrogen. The diaphragm keeps the chlorine produced at the anode from the sodium hydroxide and hydrogen produced at the cathode. If these products combine, the result is sodium hypochlorite (bleach) or sodium chlorate. Commercial producers of sodium chlorate use cells that do not have separators. The most common diaphragm is a composite of asbestos and a fluorocarbon polymer. Modern diaphragm cell plants do not have the health or environmental problems historically associated with the use of asbestos diaphragms. Some plants do employ non-asbestos diaphragms, which are now commercially available. The diaphragm cell process produces a weak sodium hydroxide solution containing unreacted salt. An additional evaporation process concentrates the caustic and removes most of the salt to make a caustic of commercial quality. 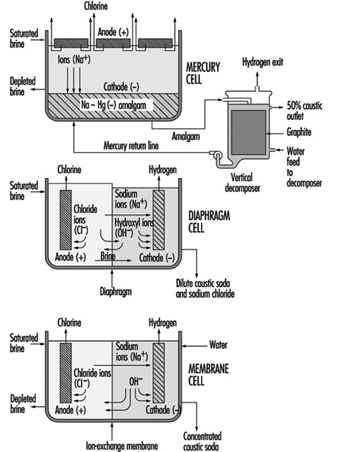 A mercury cell actually consists of two electrochemical cells. The reaction in the first cell at the anode is:

The reaction in the first cell at the cathode is:

Salt brine flows in an inclined steel trough with rubber-lined sides (see figure 4) Mercury, the cathode, flows under the brine. Anodes of coated titanium are suspended in the brine for the production of chlorine, which exits the cell to a collection and processing system. Sodium is electrolyzed in the cell and leaves the first cell amalgamated with the mercury. This amalgam flows into a second electrochemical cell called the decomposer. The decomposer is a cell with graphite as a cathode and the amalgam as the anode.

The reaction in the decomposer is:

The electrochemical reactions in a membrane cell are the same as in the diaphragm cell. A cation-exchange membrane is used in place of the porous diaphragm (see figure 1). This membrane prevents the migration of chloride ions into the catholyte, thereby producing essentially salt free 30 to 35% caustic directly from the cell. The elimination of the need to remove salt makes the evaporation of the caustic to commercial 50% strength simpler, and it requires less investment and energy. Expensive nickel is used as the cathode in the membrane cell due to the stronger caustic.

At ordinary temperatures, dry chlorine, either liquid or gas, does not corrode steel. Wet chlorine is highly corrosive because it forms hydrochloric and hypochlorous acids. Precautions should be taken to keep chlorine and chlorine equipment dry. Piping, valves and containers should be closed or capped when not in use to keep out atmospheric moisture. If water is used on a chlorine leak the resulting corrosive conditions will make the leak worse.

The volume of liquid chlorine increases with temperature. Precautions should be taken to avoid hydrostatic rupture of piping, vessels, containers or other equipment filled with liquid chlorine.

Hydrogen is a co-product of all chlorine manufactured by the electrolysis of aqueous brine solutions. Within a known concentration range, mixtures of chlorine and hydrogen are flammable and potentially explosive. The reaction of chlorine and hydrogen can be initiated by direct sunlight, other sources of ultraviolet light, static electricity or sharp impact.

Chlorine can react, at times explosively, with a number of organic materials such as oil and grease from sources such as air compressors, valves, pumps and oil-diaphragm instrumentation, as well as wood and rags from maintenance work.

As soon as there is any indication of a chlorine release, immediate steps must be taken to correct the condition. Chlorine leaks always get worse if they are not promptly corrected. When a chlorine leak occurs, authorized, trained personnel equipped with respiratory and other appropriate personal protective equipment (PPE) should investigate and take proper action. Personnel should not enter into atmospheres containing concentrations of chlorine in excess of the immediately dangerous to life and health (IDLH) concentration (10 ppm) without appropriate PPE and back-up personnel. Unnecessary personnel should be kept away and the hazard area should be isolated. Persons potentially affected by a chlorine release should be evacuated or sheltered in place as circumstances warrant.

Area chlorine monitors and wind direction indicators can supply timely information (e.g., escape routes) to help determine whether personnel are to be evacuated or sheltered in place.

When evacuation is utilized, potentially exposed persons should move to a point upwind of the leak. Because chlorine is heavier than air, higher elevations are preferable. To escape in the shortest time, persons already in a contaminated area should move crosswind.

When inside a building and sheltering in place is selected, shelter can be achieved by closing all windows, doors and other openings, and turning off air conditioners and air intake systems. Personnel should move to the side of the building furthest from the release.

Care must be taken not to position personnel without an escape route. A safe position may be made hazardous by a change in wind direction. New leaks may occur or the existing leak may get larger.

If fire is present or imminent, chlorine containers and equipment should be moved away from the fire, if possible. If a non-leaking container or equipment cannot be moved, it should be kept cool by applying water. Water should not be used directly on a chlorine leak. Chlorine and water react forming acids and the leak quickly will get worse. However, where several containers are involved and some are leaking, it may be prudent to use a water spray to help prevent overpressure of the non-leaking containers.

Sodium hydroxide solutions are corrosive, especially when concentrated. Workers at risk for exposure to spills and leaks should wear gloves, face shield and goggles and other protective clothing.

Acknowledgements: Dr. R.G. Smerko is acknowledged for making available the resources of the Chlorine Institute, Inc.