Oestrogens used in the pharmaceutical industry can generally be classified as natural or synthetic and as steroidal or non-steroidal. All steroidal oestrogens, both natural (e.g., oestrone) and synthetic (e.g., ethynyloestradiol and moestranol) have a typical multi-ring structure, as depicted in figure 6  Diethylstilboestrol (DES) and dienoestrol are examples of the non-steroidal oestrogens. The principal uses of oestrogenic compounds are in oral contraceptive tablets and tablets intended for oestrogen replacement therapy. The pure compounds (naturally derived or synthesized) are no longer manufactured in the United States, but are imported. 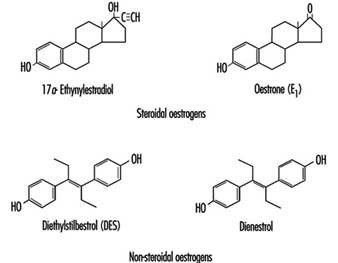 The following description is a generalized, and composite, description of the manufacturing process used in many US pharmaceutical companies. Specific product processes may not follow the flow exactly as described below; some steps may be absent in some processes, and, in other cases, additional steps may be present that are not described here.

As with most dry-product drugs, pharmaceutical products made from oestrogenic compounds are manufactured in a step-wise batch operation (figure 2). The manufacturing steps begin with the assembly and pre-weighing of both active ingredients and excipients (inactive ingredients) in an isolated room under local exhaust ventilation. When needed, the ingredients are moved to a blending room equipped with mechanical blenders. Excipients are usually loaded dry from a hopper above the blender. The active ingredients are almost always dissolved first in an alcohol, and are added manually or are fed through tubing through the side of the blender. The initial blending of the ingredients is done in a wet state. At the end of the wet blending process, the granulation is typically moved to a wet mill, where particles in the mix are reduced to a specific size. The milled granulation is then dried using a fluid bed drier or is tray-dried in ovens designed for the purpose. The dried granulation may or may not undergo the addition of a lubricant before dry-blending and/or dry-milling, depending on the specific product and process. The final granulation, ready to be made into tablets, is then stored in sealed containers. The raw materials and granulation, and sometimes the intermediate products, are typically sampled and assayed by quality-control personnel prior to being moved to the next process step. 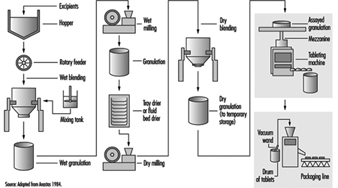 The tablets are packaged by sealing them in blister packs or bottled, depending on the nature of the product. In this process, the containers of tablets are moved to the packaging area. The tablets may be manually scooped into the packaging machine hopper or fed by means of a vacuum wand. The tablets are then either immediately sealed between layers of aluminium foil and plastic film (blister-packaging) or they are bottled. The blister packs or bottles are then conveyed along a line on which they are inspected and placed in pouches or boxed with appropriate inserts.

Reports of occupational exposures and the effects on males have been relatively few, compared with the considerable literature that exists regarding acute and chronic effects of oestrogens in women as a result of non-occupational exposures. The non-occupational literature is primarily a result of widespread contraceptive and other medical uses of oestrogenic pharmaceuticals (but also environmental pollutants with oestrogenic properties, such as the organochlorines) and focuses particularly on the relationships between that exposure and a variety of human cancers, such as that of the endometrium, cervix and breast in women (Hoover 1980; Houghton and Ritter 1995). In the occupational literature, the hyperoestrogenic syndrome in both male and female workers has been associated with exposures to DES and its derivatives, natural or conjugated oestrogens, hexoestrol and its derivatives and steroidal synthetics such as ethynyloestradiol and moestranol. Shortly after the initiation of commercial production of oestrogens, reports began to surface of their effects, such as gynaecomastia (abnormal enlargement of the breasts in a male) and decreased libido among male workers, and menstrual disorders (increased flow or inter-menstrual spotting) among female workers (Scarff and Smith 1942; Fitzsimons 1944; Klavis 1953; Pagani 1953; Watrous 1947; Watrous and Olsen 1959; Pacynski et al. 1971; Burton and Shumnes 1973; Meyer, Peteet and Harrington 1978; Katzenellenbogen 1956; Dunn 1940; Stoppleman and van Valkenburg 1955; Goldzieher and Goldzieher 1949; Fisk 1950). There have also been a few reports of toxicity syndrome associated with some progoestogenic compounds, including acetoxyprogoesterone (Suciu et al. 1973), and vinyloestrenolone in combination with ethynyloestradiol (Gambini, Farine and Arbosti 1976).

Investigators from the US National Institute for Occupational Safety and Health (NIOSH) conducted a pilot industrial hygiene and medical study in 1984 of male and female workers in two plants (Tanaka and Zaebst 1984). Measurable exposures were documented to both moestranol and natural conjugated oestrogens, both inside and outside the respiratory protective equipment used. However, no statistically significant changes in oestrogen-stimulated neurophysins (ESN), corticosteroid-binding globulins (CBG), testosterone, thyroid function, blood-clotting factors, liver function, glucose, blood lipids or gonadotropic hormones were noted in these workers. On physical examination, no adverse physical changes were noted in either male or female workers. However, in the plant using moestranol and norethindrone to manufacture oral contraceptive tablets, serum ethynyloestradiol levels appeared to show possible oestrogen exposure and absorption despite the use of respirators. Inside-respirator air samples obtained at this plant suggested less effective workplace protection factors than expected.

Hyperoestrogenic symptoms in males reported in these studies have included nipple sensitivity (manifested as tingling or tenderness of the nipple) or a feeling of pressure in the breast area and, in some cases, breast hyperplasia and gynaecomastia. Additional subjective symptoms reported by some of the male workers also included decreased libido and/or sexual potency. Findings in females included irregular menstruation, nausea, headaches, breast pain, leucorrhoea (thick, whitish discharge from the vagina or cervical canal) and ankle oedema. There have been no long-term follow-up studies in persons occupationally exposed to oestrogens or progoestogens.

Hazards and control of exposure

One of the most serious hazards in the manufacture of oestrogenic pharmaceuticals is inhalation (and to some extent oral ingestion) of the pure active oestrogenic compound during weighing, assembly and quality-assurance testing. However, substantial inhalation of the dry, blended dust (which contains a low percentage of active ingredient) may also occur to workers during granulation, compression and packaging operations. Skin absorption may also occur, particularly during the wet phases of granulation, since alcohol solutions are used. Quality-control and laboratory personnel are also at risk of exposure while sampling, assaying or otherwise handling pure oestrogenic substances, granulation or tablets. Maintenance personnel can be exposed while cleaning, repairing or inspecting mixers, hoppers, mills, vacuum lines and ventilation systems, or changing filters. NIOSH investigators have conducted an in-depth evaluation of engineering controls which have been used during the manufacturing of oral contraceptive tablets (Anastas 1984). This report provides a detailed review of controls and an evaluation of their effectiveness for granulation, milling, material transfers, powder and tablet feed equipment, and general and local exhaust ventilation systems.

Because of the potency of the oestrogenic substances, particularly the synthetic ones such as moestranol and ethynyloestradiol, all of these measures are needed to control exposures adequately. The use of personal protective equipment alone may not provide complete protection. Primary reliance should be placed on controlling exposures at the source, by process containment and by isolation.

Both high-performance liquid chromatography and radio-immunoassay procedures have been used to determine oestrogens or progoestogens in environmental samples. Serum samples have been analysed for the exogenous active compound, its metabolite (e.g., ethynyloestradiol is the main metabolite of moestranol), oestrogen-stimulated neurophysins or any of a number of other hormones (e.g., gonadotropic hormones and CBGs) considered appropriate for the specific process and hazard. Airborne monitoring usually includes breathing-zone personal monitoring, but area sampling can be useful in detecting departures from expected values over time. Personal monitoring has the advantages of detecting breakdowns or problems with processing equipment, personal protective equipment or ventilation systems and can provide an earlier warning of exposure. Biological monitoring, on the other hand, can detect exposures which may be missed by environmental monitoring (e.g., skin absorption or ingestion). In general, good practice combines both environmental and biological sampling to protect workers.