Natural rubber (cis-1,4-polyisoprene) is a processed plant product that can be isolated from several hundred species of trees and plants in many areas of the world, including the equatorial regions of Africa, Southeast Asia and South America. The milky sap, or latex, of the commercial rubber tree Hevea brasiliensis provides essentially all (more than 99%) of the world’s supply of natural rubber. Natural rubber is also produced from Ficus elastica and other African plants in production areas such as Côte d’Ivoire, Madagascar, Senegal and Sierra Leone. Natural trans-1,4-polyisoprene is known as gutta-percha, or balata, and comes from trees in South America and Indonesia. This produces a less pure rubber than the cis isomer. Another potential source of commercial natural rubber production is the guayule shrub, Parthenium argentatum, which grows in hot, arid regions, such as the southwestern United States.

Production of Hevea rubber is divided between plantations larger than 100 acres and small farms, typically less than 10 acres. The productivity of commercial rubber trees has increased regularly since the 1970s. This increased productivity is due primarily to the development and replanting of acreage with faster maturing, higher yielding trees. The use of chemical fertilizers and the control of rubber tree diseases have also contributed to the increased productivity. Strict measures for the control of exposures to herbicides and pesticides during storage, mixing and spraying, the use of appropriate protective clothing and barrier creams, and the provision of change rooms and appropriate medical surveillance can effectively control the hazards associated with the use of agricultural chemicals.

Rubber trees are usually tapped for latex by making a spiral cut through the bark of the tree on alternate days, although the frequency and method of tapping vary. The latex is collected in cups hung on the tree below the cuts. The contents of the cups are transferred to large containers and moved to processing stations. Ammonia is usually added as a preservative. Ammonia disrupts the particles of rubber and produces a two-phase product consisting of 30 to 40% solids. This product is further concentrated to 60% solids, resulting in ammoniated latex concentrate, which contains 1.6% ammonia by weight. A low-ammonia latex concentrate (0.15 to 0.25% ammonia) is also available. The low-ammonia concentrate requires the addition of a secondary preservative to the latex to avoid coagulation and contamination. Secondary preservatives include sodium pentachlorophenate, tetramethylthiuram disulphide, sodium dimethyldithiocarbamate and zinc oxide.

The chief hazards to field workers are exposure to the elements, animal and insect bites and hazards related to the sharp tools used to make incisions in the trees. Injuries that result should be treated promptly to reduce the risk of infection. Preventive and therapeutic measures can reduce the hazards of the climate and pests. The incidences of malaria and gastro-enteric diseases have been reduced on modern plantations through prophylaxis, mosquito control and sanitary measures.

The guayule shrub, a native plant of southern Texas and north central Mexico, contains natural rubber in its stems and roots. The whole shrub must be harvested for the rubber to be extracted.

Latex from rubber trees is either shipped to consumers as a concentrate or processed further into dry rubber (see figure 1 and figure 2). For technically specified rubber, one manufacturing process involves coagulating the field latex with acid and passing the coagulated latex through cutting machines and a series of creping rollers. Hammer mills or granulators convert the product to rubber crumbs, which are screened, washed, dried, baled and packed. Another method of technically specified rubber production involves the addition of a crumbling agent before coagulation, followed by crumbling using creping rollers.

Figure 1. Rubber tree tapper coagulating collected latex by first gathering it on a stick and then holding it over a bowl of smoke 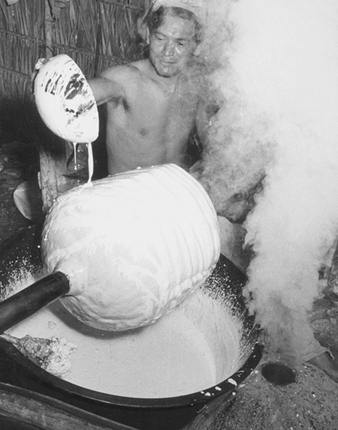 Figure 2. Processing rubber on a plantation in Eastern Cameroon 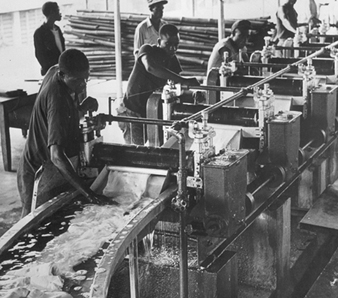 Ribbed smoked sheets are produced by passing coagulated latex through a series of rollers to produce thin sheets, which are embossed with a ribbed pattern. The ribbed pattern serves mainly to increase the surface area of the material and aid its drying. The sheets are preserved by placing them in a smokehouse at 60ºC for a week, visually graded, sorted and packed in bales.

Compounding formulas used for natural rubbers are essentially the same as those used for most of the unsaturated synthetic rubbers. Accelerators, activators, antioxidants, fillers, softeners and vulcanizing agents may all be required, depending upon what properties are desired in the finished compound.

The hazards arising from the use of mechanized production methods (i.e., rolls and centrifuges) require strict safety controls during installation, use and maintenance, including attention to machine guarding. Appropriate precautions must be used when processing chemicals are used. Attention should be paid to the use of appropriate walking and working surfaces to prevent slips, trips and falls. Employees should receive training in safe work practices. Strict supervision is required to prevent accidents associated with the use of heat as an aid in curing.