The manufacture of tyres and other rubber products exposes workers to a large variety of chemicals. These include many different powders, solids, oils and polymers used as compounding ingredients; anti-tack dusts to prevent sticking; mist, fumes and vapours generated by heating and curing rubber compounds; and solvents used for cements and process aids. The health effects related to most of these are not well known, except that they are usually chronic in nature rather than acute at typical exposure levels. Engineering controls are generally aimed at overall reduction of the level of dust, heated rubber emissions or curing fumes to which workers are exposed. Where there is exposure to specific chemicals, solvents or agents (such as noise) that are known to be harmful, control efforts can be targeted more specifically and in many cases the exposure can be eliminated.

Elimination or substitution of harmful materials is perhaps the most effective means of engineering control of hazards in rubber manufacturing. For example, β-naphthylamine contained as an impurity in an anti-oxidant was identified in the 1950s as a cause of bladder cancer and was banned. Benzene was once a common solvent but has been replaced since the 1950s by naphtha, or white gasoline, in which the benzene content has been steadily reduced (from 4-7% to commonly less than 0.1% of the mixture). Heptane has been used as a substitute for hexane and works just as well or better. Lead sheathing is being replaced by other materials for curing hose. Rubber compounds are being designed to reduce dermatitis in handling and the formation of nitrosamines in curing. Talcs used for anti-tack purposes are selected for low asbestos and silica content.

Local exhaust ventilation is used for control of dust, mist and fumes in rubber compound preparation and mixing and in finishing processes involving buffing and grinding of rubber products (see figure 1). With good work practices and ventilation designs, dust exposures are usually well under 2 mg/m3. Effective maintenance of filters, hoods and mechanical equipment is an essential element of engineering control. Specific hood designs are given in the American Conference of Governmental Industrial Hygienists ventilation manual and the Rubber and the Plastics Research Association of Great Britain ventilation handbook (ACGIH 1995).

Figure 1. A canopy hood controls fumes in finishing a tube casting at an industrial rubber plant in Italy 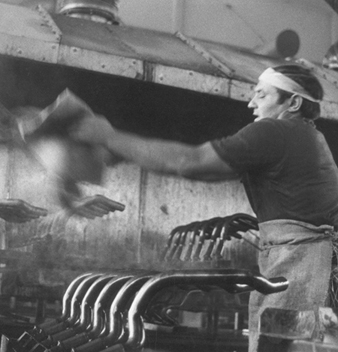 Compounding chemicals have traditionally been scooped from bins into small bags on a weighing scale, then placed on a conveyor to be poured into the mixer or onto a mill. Dust exposures are controlled by a slotted side-draft hood behind the scale (see figure 2). and in some cases by slotted hoods at the edge of the stock bins. Dust control in this process is improved by substituting larger-particle-sized or granular forms for powders, by combining ingredients in a single (often heat-sealed) bag and by feeding compounds automatically from the storage bin to the transfer bag or directly to the mixer. Operator work practices also strongly influence the amount of dust exposure. The Banbury mixer requires an effective enclosing hood to capture the dust from charging and to collect the fumes and oil mist coming from the heated rubber as it mixes. Well-designed hoods are often disrupted by drafts from pedestal fans used to cool the operator. Powered equipment is available to carry bags from pallets to the charging conveyor.

Mills are provided with canopy hoods to capture emissions of oil mist, vapours and fumes rising from the hot rubber. Unless more enclosed, these hoods are less effective in capturing dust when compounds are mixed on the mill or the mill is dusted with anti-tack powders (see figure 3). They are also sensitive to drafts from pedestal fans or misdirected general ventilation make-up air. A push-pull design has been used which places an air curtain in front of the operator directed up into the canopy. Mills are often raised to put the roller nip point out of the operator’s reach, and they also have a trip wire or bar in front of the operator to stop the mill in an emergency. Bulky gloves are worn that will be pulled into the nip before the fingers are caught.

Figure 3. A curtain at the edge of a canopy hood over a mixing mill helps contain dust. Rubber slabs taken off mills and calenders are coated to keep them from sticking together. This is sometimes done by dusting the rubber with powder, but is now more often done by dipping it in a water bath (see figure 4). Applying the anti-tack compound this way greatly reduces dust exposure and improves housekeeping.

Figure 4. A rubber strip taken from a Banbury batch-off mill goes through a water bath to apply anti-tack compound. 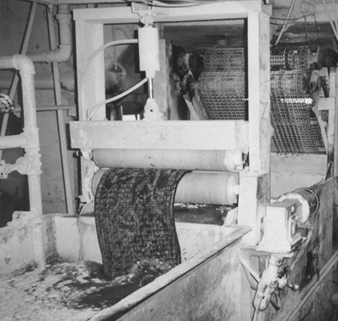 Dust and fumes are ducted to bag-house or cartridge-type dust collectors. In large installations, air is sometimes recirculated back into the factory. In that case, leak detection equipment is necessary to be sure contaminants are not recirculated. Odours from some ingredients such as animal glue make air recirculation undesirable. Rubber dust burns easily, so fire and explosion protection for ductwork and dust collectors are important considerations. Sulphur and explosive dusts such as cornstarch also have special fire-protection requirements.

Local exhaust hoods are often used at extruder heads to capture mist and vapours from the hot extrusion, which may then be directed into a water bath to cool it and suppress the emissions. Hoods are also used at many other emission points in the factory, such as grinders, dip tanks and laboratory test equipment, where air contaminants can easily be collected at the source.

The numbers and physical configurations of building stations for tyres and other products usually make them unsuitable for local exhaust ventilation. Confinement of solvents to covered containers as much as possible, along with careful work practices and adequate dilution air volume in the work area, are important for keeping exposures low. Gloves or applicator tools are used to minimize skin contact.

Curing presses and vulcanizers release large amounts of hot curing fumes when they are opened. Most of the visible emission is oil mist, but the mixture is also rich in many other organic compounds. Dilution ventilation is the control measure most often used, often in combination with canopy hoods or curtained enclosures over individual vulcanizers or groups of presses. Large volumes of air are required which, if not replaced by adequate make-up air, can disrupt ventilation and hoods in connecting buildings or departments. Operators should be positioned outside the hood or enclosure. If they must be under the hood, downdraft fresh air ventilators can be placed over their work stations. Otherwise, replacement air should be introduced adjacent to the enclosures but not directed into the canopy. The British occupational exposure limit for rubber curing fumes is 0.6 mg/m3 of cyclohexane soluble material, which is normally feasible with good practice and ventilation design.

Making and applying rubber cement presents special engineering control requirements for solvents. Mixing churns are sealed and vented to a solvent recovery system, while dilution ventilation controls vapour levels in the work area. The highest operator exposures come from reaching into churns to clean them. In applying rubber cement to fabric, a combination of local exhaust ventilation at emission points, covered containers, general ventilation in the workroom and properly directed make-up air controls worker exposure. Drying ovens are exhausted directly, or sometimes air is recirculated in the oven before it is exhausted. Carbon adsorption solvent recovery systems are the most common air-cleaning device. Recovered solvent is returned to the process. Fire-protection standards require that the flammable vapour concentration in the oven be maintained below 25% lower explosion limit (LEL), unless continuous monitoring and automatic controls are provided to ensure that the vapour concentration does not exceed 50% LEL (NFPA 1995).

Automation of processes and equipment often lowers exposure to airborne contaminants and physical agents by placing the operator at a greater distance, by confining the source or by reducing the generation of the hazard. Less physical strain on the body is also an important benefit of automation in processes and material handling.

Significant noise exposures often come from equipment such as braiders and belt grinders, air-exhaust ports, compressed air leaks and steam leaks. Noise-reducing enclosures are effective for braiders and grinders. Very effective silencers are made for air-exhaust ports. In some cases the ports can be ducted to a common header that vents elsewhere. Air noise from leaks can often be reduced by better maintenance, enclosure, design or good work practices to limit the noise cycle.

To prevent dermatitis and rubber allergies, rubber chemicals and fresh rubber batches should not come in contact with the skin. Where engineering controls are insufficient for this, long gauntlet gloves, or gloves and long-sleeved shirts, should be used to keep powders and rubber slabs off the skin. Work clothes should be kept separate from street clothing. Showers are recommended before changing to street clothing to remove residual contaminants from the skin.

Other protective equipment such as hearing protection and respirators may also be necessary at times. However, good practice dictates that priority always be given to substitution or other engineering solutions to reduce hazardous exposures in the workplace.