The treatment and processing of animal skins and hides can be a source of considerable environmental impact. Discharged wastewater contains pollutants from the hides, products from their decomposition and chemicals and various spent solutions used for hide preparation and during the tanning process. Solid wastes and some atmospheric emissions also may arise.

The major public concern over tanneries has traditionally been about odours and water pollution from untreated discharges. Other issues have arisen more recently from the increasing use of synthetic chemicals such as pesticides, solvents, dyes, finishing agents and new processing chemicals which introduce problems of toxicity and persistence.

Tanning technology that is now available, based on a lower chemical and water consumption, has less impact on the environment than traditional processes. However, many obstacles remain to its widespread application.

Figure 1 presents the different wastes and environmental impacts associated with the various processes used in the tanning industry.

Untreated tannery wastes in surface waters can bring about a rapid deterioration of their physical, chemical and biological properties. Simple end-of-pipe effluent treatment processes can remove over 50% of suspended solids and biochemical oxygen demand (BOD) of effluent. More sophisticated measures are capable of higher levels of treatment.

As tannery effluents contain several chemical constituents that need to be treated, a sequence of treatment processes in turn must be used. Flow segregation is useful to allow separate treatment of concentrated waste streams.

Biological decomposition of organic matter as well as sulphide and ammonia emissions from wastewaters are responsible for the characteristic objectionable odours arising from tanneries. The siting of installations has been an issue because of the odours that have historically been associated with tanneries. Reduction of these odours is more a question of operational maintenance than of technology.

Solvent and other vapours from the finishing operations vary with the type of chemicals used and the technical methods employed to reduce their generation and release. Up to 30% of the solvent used may be wasted through emissions, while modern processes are available to reduce this to around 3% in many cases.

The practice by many tanneries of incinerating solid wastes and offcuts raises the importance of adopting good incinerator design and following careful operating practices.

Treatment of sludge constitutes the largest disposal problem, apart from effluent. Sludges of organic composition, if free from chrome or sulphides, have value as a soil conditioner as well as a small fertilizer effect from nitrogenous compounds contained therein. These benefits are best realized by ploughing immediately after application. Agricultural use of chrome-containing soils has been a matter of controversy in various jurisdictions, where guidelines have determined acceptable applications.

Various markets exist for the conversion of trimmings and fleshings into by-products used for a variety of purposes, including the production of gelatin, glue, leatherboard, tallow grease and proteins for animal feed. Process effluents, subject to suitable treatment and quality control, are sometimes used for irrigation where water is in short supply and/or effluent disposal is severely restricted.

To avoid problems of leachate generation and odour, only solids and dewatered sludges should be disposed of at landfill sites. Care must be taken to ensure that tannery wastes do not react with other industrial residues, such as acidic wastes, which can react to create toxic hydrogen sulphide gas. Incineration under uncontrolled conditions may lead to unacceptable emissions and is not recommended.

Improving production technologies to increase environmental performance can achieve a number of objectives, such as:

Water consumption can vary considerably, ranging from less than 25 l/kg of raw hide to greater than 80 l/kg. Water use efficiency can be improved through the application of techniques such as increased volume control of processing waters, “batch” versus “running water” washes, low float modification of existing equipment; low float techniques using updated equipment, re-use of wastewater in less critical processes and recycling of individual process liquors.

Traditional soaking and unhairing account for over 50% of the BOD and chemical oxygen demand (COD) loads in typical tanning effluents. Various methods can be employed to substitute for sulphide, to recycle lime/sulphide liquors and to incorporate hair-saving techniques.

Reduction in chromium pollution can be achieved through measures to increase the levels of chrome that are fixed in the tanning bath and reduce the amounts that are “bled out” in subsequent processes. Other methods to reduce release of chromium are through direct recycling of used chrome liquors (which also reduces salinity of waste effluent) and the treatment of collected chrome-bearing liquors with alkali to precipitate the chromium as hydroxide, which can then be recycled. An illustration of a communal chrome recovery operation is shown in figure 2.

Figure 2. Flow chart for a communal plant for chrome recovery 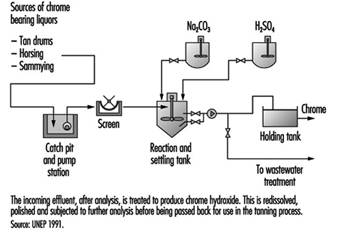 Where vegetable tanning is employed, preconditioning of hides can enhance the penetration and fixation of hides and contribute to decreased tannin concentrations in effluents. Other tanning agents such as titanium have been used as substitutes for chromium to produce salts of generally lower toxicity and to generate sludges that are inert and safer to handle.