Adapted from 3rd edition, Encyclopaedia of Occupational Health and Safety.

All “oriental” carpets are hand woven. Many are made in family workplaces, with all the members of the household, often including very small children, working long days and often into the night on the loom. In some cases it is only a part-time occupation of the family, and in some areas the carpet weaving has been moved from the home into factories that are usually small.

The processes involved in the manufacture of a carpet are: yarn preparation, consisting of wool sorting, washing, spinning and dyeing; designing; and the actual weaving.

In some cases the yarn is received at the weaving place already spun and dyed. In others, the raw fibre, usually wool, is prepared, spun and dyed at the weaving place. After the sorting of the wool fibre into grades, usually done by women sitting on the floor, it is washed and spun by hand. The dyeing is carried out in open vessels using mostly aniline-based or alizarine dyestuffs; natural dyestuffs are no longer being used.

In handicraft weaving (or tribal weaving, as it is sometimes called), the designs are traditional, and no new designs need to be made. In industrial establishments employing a number of workers, however, there may be a designer who first sketches the design of a new carpet on a sheet of paper and then transfers it in colours onto squared paper from which the weaver can ascertain the number and arrangement of the various knots to be woven into the carpet.

In most cases the loom consists of two horizontal wooden rollers supported on uprights, one about 10 to 30 cm above floor level and the other about 3 m above it. The warp yarn passes from the top roller to the bottom roller in a vertical plane. There is usually one weaver working at the loom, but for wide carpets there may be as many as six weavers working side by side. In about 50% of the cases, the weavers squat on the floor in front of the bottom roller. In other cases, they may have a narrow horizontal plank on which to sit, which is raised up to 4 m above the floor as weaving proceeds. The weaver has to tie short pieces of woollen or silk yarn into knots around pairs of warp threads and then move the thread by hand across the whole length of the carpet. Picks of weft are beaten up into the fibre of the carpet by means of a beater or hand comb. The tufts of yarn protruding from the fibre are trimmed or cut down by scissors.

As the carpet is woven, it is usually wound onto the lower roller, which increases its diameter. When the workers squat on the floor, the position of the lower roller prevents them from stretching their legs, and as the diameter of the rolled-up carpet increases, they have to sit further back but must still lean forward to reach the position in which they tie in the knots of yarn (see figure 1). This is avoided when the weavers sit or squat on the plank, which may be raised as high as 4 m above the floor, but there may still not be enough room for their legs, and they are often forced into uncomfortable positions. In some instances, however, the weaver is provided with a back rest and a pillow (in effect, a legless chair), which may be moved horizontally along the plank as the work progresses. Recently, improved types of elevated looms have been developed that allow the weaver to sit on a chair, with ample room for his or her legs. 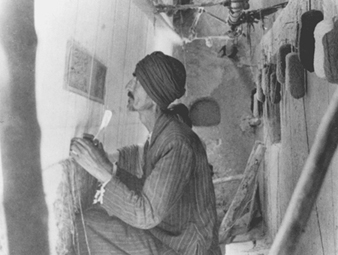 In some parts of the Islamic Republic of Iran, the warp in the carpet loom is horizontal instead of being vertical, and the worker sits on the carpet itself whilst working; this makes the task even more difficult.

As a largely cottage industry, carpet weaving is fraught with the hazards imposed by impoverished homes with small, crowded rooms that have poor lighting and inadequate ventilation. The equipment and processes are passed along from generation to generation with little or no opportunity for the education and training that might spark a break with the traditional methods. Carpet weavers are subject to skeletal deformations, eyesight disorders and mechanical and toxic hazards.

The squatting position that the weavers must occupy on the old type of loom, and the need for them to lean forward to reach the place into which they knot the yarn, may, over time, lead to some very serious skeletal problems. These are often compounded by the nutritional deficiencies associated with poverty. Especially among those who start as young children, the legs may become deformed (genu valgum), or a crippling arthritis of the knee may develop. The constriction of the pelvis that sometimes occurs in females may make it necessary for them to have a Cesarean delivery when giving birth. Lateral curvature of the spinal column (scoliosis) and lordosis are also common maladies.

The constant close focus on the point of weaving or knotting may cause considerable eyestrain, particularly when the lighting is inadequate. It should be noted that electric lighting is not available in many home workplaces, and the work, which is often continued into the night, must be performed by the light of oil lamps. There have been cases of almost total blindness occurring after only about 12 years of employment at this work.

The constant tying of small knots and the threading of the weft yarn through the warp threads may result in swollen finger joints, arthritis and neuralgia causing permanent disabilities of the fingers.

The high degree of skill and constant attention to detail over long hours are potent psychosocial stressors, which may be compounded by exploitation and harsh discipline. Children are often “robbed of their childhood”, while adults, who often lack the social contacts essential for emotional balance, may develop nervous illness manifested by trembling of the hands (which may hamper their work performance) and sometimes mental troubles.

As no power machinery is used, there are practically no mechanical hazards. If the looms are not properly maintained, the wooden lever tensioning the warp may break and strike the weaver as it falls. This hazard may be avoided by using special thread tensioning gears.

The dyestuffs used, particularly if they contain potassium or sodium bichromate, may cause skin infections or dermatitis. There is also the risk from the use of ammonia, strong acids and alkalis. Lead pigments are sometimes used by designers, and there have been cases of lead poisoning due to their practice of smoothing the tip of the paintbrush by placing it between the lips; lead pigments should be replaced by non-toxic colours.

There is a danger of anthrax infection from contaminated raw wool from areas where the bacillus is endemic. The appropriate governmental authority should ensure that such wool is properly sterilized before it is delivered to any workshops or factories.

The sorting of the raw material—wool, camel hair, goat hair and so on—should be done over a metal grid fitted with exhaust ventilation to draw any dust into a dust collector located outside the workplace.

The rooms in which the wool-washing and dyeing processes take place should be adequately ventilated, and the workers provided with rubber gloves and waterproof aprons. All waste liquors should be neutralized before being discharged into waterways or sewers.

Good lighting is required for the designing room and for weaving work. As noted above, inadequate light is a serious problem where there is no electricity and when the work is continued after sundown.

Perhaps the most important mechanical improvement would be mechanisms that raise the lower roller of the loom. This would obviate the necessity of weavers having to squat on the floor in an unhealthy and uncomfortable fashion and allow them to sit in a comfortable chair. Such an ergonomic improvement will not only improve the health of the workers but, once adopted, will increase their efficiency and productivity.

The workrooms should be kept clean and well ventilated, and properly boarded or covered floors substituted for earth floors. Adequate heating is required during cold weather. Manual manipulation of the warp places great strain on the fingers and may cause arthritis; wherever possible, hooked knives should be used for holding and weaving operations. Pre-employment and annual medical examinations of all workers are highly desirable.

The manufacture of carpets by the tying of knots of yarn by hand is a very slow process. The number of knots varies from 2 to 360 per square centimetre according to the quality of the carpet. A very large carpet with an intricate design may take over a year to make and involve the tying of hundreds of thousands of knots.

Hand tufting is an alternative method of rug manufacture. It uses a special kind of hand tool fitted with a needle through which the yarn is threaded. A sheet of coarse cotton cloth on which the design of the carpet has been traced is suspended vertically, and when the weaver places the tool against the cloth and presses a button, the needle is forced through the cloth and retracts, leaving a loop of yarn about 10 mm deep on the reverse side. The tool is moved horizontally about 2 or 3 mm, leaving a loop on the face of the cloth, and the trigger button is pressed again to form another loop on the reverse side. With acquired dexterity, as many as 30 loops on each side can be made in 1 minute. Depending on the design, the weaver has to stop from time to time to change the colour of yarn as called for in different parts of the pattern. When the looping operation has been finished, the carpet is taken down and placed reverse side up on the floor. A rubber solution is applied to the back and a covering or backing of stout jute canvas placed over it. The carpet is then placed face upwards and the protruding loops of yarn are trimmed by portable electric clippers. In some cases the design of the carpet is made by cutting or trimming the loops to varying depths.

Hazards in this type of carpet making are considerably less than in the manufacture of hand-knotted carpets. The operator usually sits on a plank in front of the canvas and has plenty of leg room. The plank is raised as the work proceeds. The weaver would be made more comfortable by provision of a backrest and a cushioned seat which could be moved horizontally along the plank as work proceeds. There is less visual strain, and no hand or finger movements that are likely to cause trouble.

The rubber solution used for this carpet usually contains a solvent which is both toxic and highly flammable. The backing process should be carried out in a separate workroom with good exhaust ventilation, at least two fire exits, and with no open flames or lights. Any electrical connections and equipment in this room should be certified as meeting sparkproof/flameproof standards. No more than a minimum amount of the flammable solution should be kept in this room, and appropriate fire extinguishers should be provided. A fire-resistant storage facility for the flammable solutions should not be situated inside any occupied building, but preferably in an open yard.

In most countries, the general provisions of factory legislation cover the necessary standards required for the safety and health of workers in this industry. They may not be applicable, however, to family undertakings and/or home work, and they are difficult to enforce in the scattered small enterprises which, in the aggregate, employ many workers. The industry is notorious for the exploitation of its workers and for its use of child labour, often in defiance of existing regulations. A nascent worldwide trend (mid-1990s) among purchasers of hand-woven and tufted carpets to refrain from buying products produced by illegal or overly exploited workers will, it is hoped by many, eliminate such servitude.