Trenches are confined spaces usually dug to bury utilities or to place footings. Trenches are normally deeper than they are wide, as measured at the bottom, and are usually less than 6 m deep; they are also known as shallow excavations. A confined space is defined as a space that is large enough for a worker to enter and perform work, has limited means of entry and exit, and is not designed for continuous occupancy. Several ladders should be provided to enable workers to escape the trench.

Typically trenches are open only for minutes or hours. The walls of any trench will eventually collapse; it is merely a matter of time. Short-term apparent stability is a temptation for a contractor to send workers into a dangerous trench in hopes of rapid progress and financial gain. Death or serious injuries and mutilations can result.

In addition to being exposed to the possibility of collapsing trench walls, workers in trenches, can be harmed or killed by engulfment in water or sewage, exposure to hazardous gases or reduced oxygen, falls, falling equipment or materials, contact with severed electrical cables and improper rescue.

Cave-ins account for at least 2.5% of annual work-related deaths in the United States, for example. The average age of workers killed in trenches in the US is 33. Often a young person is trapped by a cave-in and other workers attempt a rescue. With failed rescue attempts, most of the dead are would-be rescuers. Emergency teams trained in trench rescue should be contacted immediately in the event of a cave-in.

Routine inspections of the trench walls and worker protection systems are essential. Inspections should occur daily before the start of work and after any occurrence—such as rainstorms, vibration or broken pipes—that may increase hazards. Following are descriptions of the hazards and how to prevent them.

The main cause of deaths related to trenching is collapsed trench walls, which can crush or suffocate workers.

Trench walls may be weakened by activities outside but near a trench. Heavy loads must not be placed on the edge of the wall. Trenches should not be dug close to structures, such as buildings or railroads, because the trenching may undermine the structures and weaken the foundations, thus causing the structures and trench walls to collapse. Competent engineering assistance should be sought in the planning stages. Vehicles must not be permitted to approach too close to the sides of a trench; stop logs or soil berms should be in place to prevent vehicles from doing so.

Types of soil and environment

Proper selection of a worker protection system depends on soil and environmental conditions. Soil strength, the presence of water and vibration from equipment or nearby sources affect the stability of trench walls. Previously excavated soils never regain their strength. Accumulation of water in a trench, regardless of depth, signals the most dangerous situation.

The soil must be classified and the construction scene evaluated before an appropriate worker protection system is selected. A project safety and health plan should address unique conditions and hazards related to the project.

Soils can be divided into two main groups: cohesive and granular. Cohesive soils contain a minimum of 35% clay and will not break when rolled into threads 50 mm long and 3 mm in diameter and held by one end. With cohesive soils, trench walls will stand vertically for short periods of time. These soils are responsible for as many cave-in deaths as any other soil, because the soil appears stable and precautions often are not taken.

Granular soils consist of silt, sand, gravel or larger material. These soils exhibit apparent cohesion when wet (the sand-castle effect); the finer the particle, the greater the apparent cohesion. When submerged or dry, however, the coarser granular soils will immediately collapse to a stable angle, 30 to 45°, depending on their particle angularity or roundness.

Sloping prevents trench failure by removing the weight (of the soil) that can lead to trench instability. Sloping, including benching (sloping done in a series of steps), requires a wide opening at the top of a trench. The angle of a slope depends on the soil and environment, but slopes range from 0.75 horizontal: 1 vertical to 1.5 horizontal: 1 vertical. The slope of 1.5 horizontal: 1 vertical is set back 1.5 m on each side at the top for each meter of depth. Even the slightest slope is beneficial. However, the width requirements of slopes often make this approach impracticable on construction sites.

Shoring can be used for all conditions. A shore consists of an upright on each side of a trench, with braces in between (see figure 1). Shores help prevent trench wall collapse by exerting outward forces on a trench wall. Skip shores consist of vertical uprights and cross braces with soil arching between; they are used in clays, the most cohesive soils. Shores must be no more than 2 m apart from each other. Greater distances between cross braces can be achieved by using wales (or walings) to hold the uprights in place (see figure 2). Close sheeting is used in granular and weaker cohesive soils; the trench walls are covered entirely with sheeting (see figure 3). Sheeting can be made of wood, metal or fibreglass; steel trench sheets are common. Tight sheeting is used when flowing or seeping water is encountered. Tight sheeting prevents water from eroding and bringing soil particles into a trench. A shoring system must always be kept tight against the soil to prevent collapse. Braces can be of wood or of screw, hydraulic or pneumatic jacks. Wales can be of wood or metal.

Figure 1. Shores consist of uprights on each side of a trench with cross braces in between 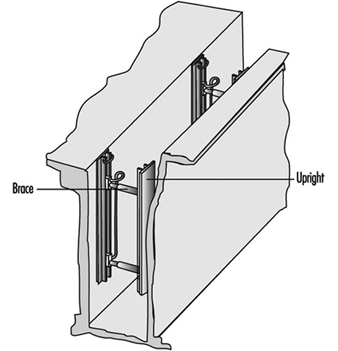 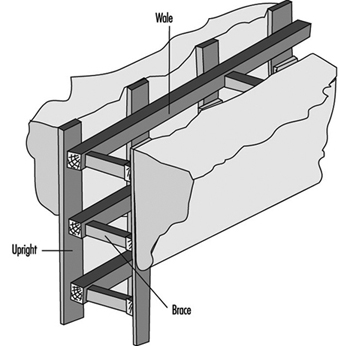 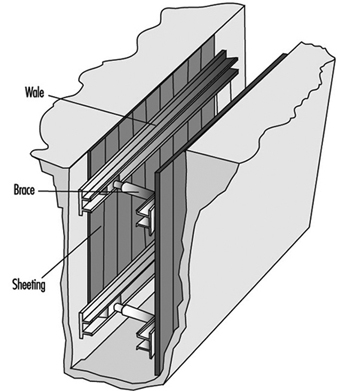 Shields, or trench boxes, are large personal protective devices; they do not prevent trench wall collapse but protect workers who are inside. Shields are generally made of steel or aluminium and their size commonly ranges from approximately 1 m to 3 m high and 2 to 7 m long; many other sizes are available. Shields may be stacked on top of each other (figure 4). Guard systems must be in place against hazardous movements of shields in the event of a trench wall collapse. One way is to backfill on both sides of a shield. 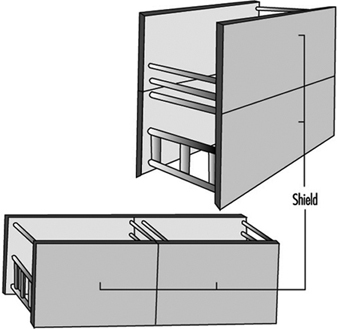 New products are available that combine the qualities of a shore and a shield; some devices are useable in particularly hazardous ground. Shield-shore units can be used as static shields or can act as a shore by hydraulically or mechanically exerting forces on the trench wall. The smaller units are particularly useful when repairing breaks in utility pipes in city streets. Massive units with shield panels can be forced into the ground by mechanical or hydraulic means. Soil is then excavated from inside the shield.

Several steps are recommended to prevent engulfment by water or sewage in a trench. First, known utilities should be contacted before digging to learn where water (and other) pipes are located. Second, water valves that feed pipes into the trench should be closed. Cave-ins that break water mains or cause accumulations of water or sewage must be avoided. All utility pipes and other utility equipment need to be supported.

Harmful atmospheres can lead to worker death or injury resulting from a lack of oxygen, fire or explosion or toxic exposures. All trench atmospheres where abnormal conditions are present or suspected should be tested. This is especially true around buried garbage, vaults, fuel tanks, manholes, swamps, chemical processors and other facilities that can release deadly gases or fumes or deplete oxygen in the air. Construction equipment exhausts must be dispersed.

Air quality should be determined with instruments from outside the trench. This can be done by lowering a meter or its probe into the trench. The air in trenches should be tested in the following order. First, oxygen must be 19.5 to 23.5%. Second, flammability or explosibility must be no higher than 10% of the lower flammable or explosive limits (LFLs or LELs). Third, levels of potentially toxic substances—such as hydrogen sulphide —should be compared with published information. (In the US, one source is the National Institute for Occupational Safety and Health Pocket Guide to Chemical Hazards, which gives, permissible exposure limits (PELs)). If the atmosphere is normal, workers may enter. Ventilation may correct an abnormal atmosphere, but monitoring must continue. Sewers and similar spaces where the air is constantly changing usually require (or should require) a permit-entry procedure. Permit-entry procedures require full equipment and a three-person team: a supervisor, an attendant and an entrant.

Falls and Other Hazards

Falls into and within trenches can be prevented by providing safe and frequent means for entering and exiting a trench, safe walkways or bridges where workers or equipment are permitted or required to cross over trenches and barriers adequate to stop other workers or bystanders or equipment from approaching a trench.

Falling equipment or materials can cause death or injury through blows to the head and body, crushing and suffocation. The spoil pile should be kept at least 0.6 m from the edge of a trench, a barrier should be provided that will prevent soil and rock material from rolling into the trench. All other materials, such as pipes, must also be prevented from falling or rolling into a trench. Workers must not be permitted to work under suspended loads or loads handled by digging equipment.

All utilities should be marked prior to digging in order to prevent electrocution or severe burns caused by contact with live power lines. Equipment booms must not be operated near overhead power lines; if necessary, overhead lines must be grounded out or removed.

Often, one death or severe injury in a trench is compounded by a poorly thought-out rescue attempt. The victim and rescuers may become trapped and overcome by deadly gases, fumes or lack of oxygen; drowned; or mutilated by machines or rescue ropes. These compounded tragedies can be prevented by following a safety and health plan. Equipment such as air testing meters, water pumps and ventilators should be well-maintained, properly assembled and available on the job. Management should train and require workers to follow safe work practices and wear all necessary personal protective equipment.