Bullfighting, or the corrida as it is commonly called, is popular in Spain, Spanish-speaking countries in Latin America (especially Mexico), southern France and Portugal. It is highly ritualized, with pageants, well-defined ceremonies and colourful traditional costumes. Matadors are highly respected and often begin their training at an early age in an informal apprenticeship system.

Rodeos, on the other hand, are a more recent sports event. They are an outgrowth of skills contests between cowboys illustrating their everyday activities. Today, rodeos are formalized sports events popular in the western United States, western Canada and Mexico. Professional rodeo cowboys (and some cowgirls) travel the rodeo circuit from one rodeo to another. The most common rodeo events are bronco riding, bull riding, steer wrestling (bulldogging) and calf roping.

Bullfights. Participants in a bullfight include the matadors, their assistants (the banderilleros and picadors) and the bulls. When the bull first enters the arena from the bull pen gate, the matador attracts its attention with a series of passes with his large cape. The bull is attracted by the movement of the cape, not the colour, since bulls are colour-blind. The matador’s reputation is based on how close he gets to the horns of the bull. These fighting bulls have been bred and trained for centuries for their aggressiveness. The next part of the bullfight involves the weakening of the bull by mounted picadors placing lances in the bull, and then banderilleros, working on foot, placing barbed sticks called banderillas in the bull’s shoulder in order to lower the bull’s head for the kill.

The final stage of the fight involves the matador trying to kill the bull by inserting his sword blade between the shoulder blades of the bull into the aorta. This stage involves many formalized passes with the cape before the final kill. The greater the risks taken by the matador, the greater the acclaim, and of course the greater the risk of being gored (see figure 1). Bullfighters generally receive at least one goring per season, which could involve as many as 100 bullfights per year per matador. 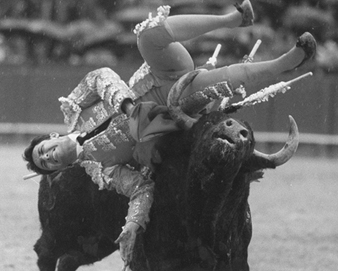 The primary hazard facing the matadors and their assistants is being gored or even killed by the bull. Another potential hazard is tetanus from being gored. One epidemiological study in Madrid, Spain, indicated that only 14.9% of bullfighting professionals had complete anti-tetanus vaccination, while 52.5% had suffered occupational injuries (Dominguez et al. 1987). Few precautions are taken. The mounted picadors wear steel leg armour. Otherwise, the bullfighting professionals depend on the training and skills of themselves and their horses. One essential precaution is adequate planning for onsite emergency medical care (see “Motion picture and television production” in this chapter).

Rodeos. The most hazardous common rodeo events are bronco or bull riding and steer wrestling. In bronco or bull riding, the purpose is to stay on the bucking animal for a predetermined time. Bronco riding can be either bareback or with a saddle. In steer wrestling, a rider on horseback attempts to throw the steer to the ground by diving off the horse, grabbing the bull by its horns and wrenching it to the ground. Calf roping involves roping a calf from horseback, jumping off the horse and then hog-tying the front and back legs of the calf together in the shortest possible time.

Besides the rodeo contestants, those at risk include the pickup riders or outriders, whose role is to rescue the thrown rider and capture the animal, and the rodeo clowns, whose job is to distract the animal, especially bulls, to give the thrown rider a chance to escape (figure 2). They do this while on foot and dressed in a colourful costume to attract the animal’s attention. Hazards include being trampled, being gored by the bull’s horns, injuries from being bucked off, knee injuries from jumping off the horse, elbow injuries in bronco and bull riders from holding on to the animal with one hand and facial injuries from bulls tossing their heads back. Injuries also occur from bronco or bull riders being smashed against the sides of the chute while waiting for the gate to open and the animal to be released. Severe injuries and fatalities are not infrequent. Bull riders sustain 37% of all rodeo-related injuries (Griffin et al. 1989). In particular, brain and spinal cord injuries are of concern (MMWR 1996). One study of 39 professional rodeo cowboys showed a total of 76 elbow abnormalities in 29 bronco and bull riders (Griffin et al. 1989). They concluded that the injuries were a result of constant hyperextension of the arm gripping the animal, as well as injuries in falls.

Figure 2. Rodeo clown distracting a bull from a fallen rider. 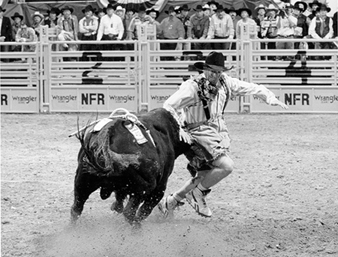 The main way of preventing injuries lies in the skills of the rodeo cowboys, pickup riders and rodeo clowns. Well-trained horses are also essential. Taping elbows and wearing elbow pads has also been recommended for bronco and bull riding. Safety vests, mouth guards and safety helmets are rare, but becoming more accepted. Face masks have occasionally been used for bull riding. As in bullfighting, an essential precaution is adequate planning for on-site emergency medical care.

In both rodeos and bullfighting, of course, the animal keepers, feeders and so on are also at risk. For more information on this aspect, see “Zoos and aquariums” in this chapter.