The helicopter is a very special type of aircraft. It is used in every part of the world and serves a variety of purposes and industries. Helicopters vary in size from the smallest single-seat helicopters to giant heavy-lift machines with gross weights in excess of 100,000 kg, which is about the same size as a Boeing 757. The purpose of this article is to discuss some of the safety and health challenges of the machine itself, the different missions it are used for, both civilian and military, and the helicopter’s operating environment.

The helicopter itself presents some very unique safety and health challenges. All helicopters use a main rotor system. This is the lifting body for the machine and serves the same purpose as the wings on a conventional airplane. Rotor blades are a significant hazard to people and property because of their size, mass and rotational speed, which also makes them difficult to see from certain angles and in different lighting conditions.

Many people recognize the characteristic slap sound of a helicopter’s rotor system. This noise is encountered only when the helicopter is in forward flight, and is not considered a health problem. The compressor section of the engine produces extremely loud noise, often in excess of 140 dBA, and unprotected exposure must be avoided. Hearing protection (ear plugs and a noise attenuating headset or helmet) should be worn when working in and around helicopters.

There are several other hazards to consider when working with helicopters. One is flammable or combustible liquids. All helicopters require fuel to run the engine(s). The engine and the main and tail rotor transmissions use oil for lubrication and cooling. Some helicopters have one or more hydraulic systems and use hydraulic fluid.

Helicopters build a static electric charge when the rotor system is turning and/or the helicopter is flying. The static charge will dissipate when the helicopter touches the ground. If an individual is required to grab a line from a hovering helicopter, as during logging, external lifts or rescue efforts, that person should let the load or line touch the ground before grabbing it in order to avoid a shock.

Helicopter operations
The uses of helicopters are numerous. The diversity of operations can be divided into two categories: civil and military.
Civil

Rescue/air ambulance. The helicopter was originally designed with rescue in mind, and one of its most widespread uses is as an ambulance. These are often found at the scene of an accident or disaster (see figure 2). They can land in confined areas with qualified medical teams on board who care for the injured at the scene while en route to a medical facility. Helicopters are also used for non-emergency flights when speed of transport or patient comfort is required.

Offshore oil support. Helicopters are used to help supply offshore oil operations. They transport people and supplies between land and platform and between platforms.

Executive/personal transport. The helicopter is used for point-to-point transportation. This is usually done over short distances where geography or sluggish traffic conditions prevent rapid ground transportation. Corporations build helipads on company property to allow easy access to airports or to facilitate transportation between facilities.

Sightseeing. The use of helicopters in the tourist industry has seen continuous growth. The excellent view from the helicopter combined with its ability to access remote areas make it a popular attraction.

Law enforcement. Many police departments and governmental agencies use helicopters for this type of work. The helicopter’s mobility in crowded urban areas and remote rural areas makes it invaluable. The largest rooftop helipad in the world is at the Los Angeles Police Department.

Film operations. Helicopters are a staple in action movies. Other types of movies and film-based entertainment are filmed from helicopters.

News gathering. Television and radio stations employ helicopters for traffic spotting and news gathering. Their ability to land at the place where the news is happening makes them a valuable asset. Many of them are also equipped with microwave transceivers so they can send their stories, live, over fairly long distances, while en route.

Heavy lift. Some helicopters are designed to carry heavy loads at the end of external lines. Aerial logging is one application of this concept. Construction and oil exploration crews make extensive use of the helicopter’s capacity for lifting large or bulky objects into place.

Aerial application. Helicopters can be fitted with spray booms and loaded to dispense herbicides, pesticides and fertilizers. Other devices can be added that allow helicopters to fight fires. They can drop either water or chemical retardants.

Rescue/aerial ambulance. The helicopter is used widely in humanitarian efforts. Many nations around the world have coast guards that engage in maritime rescue work. Helicopters are used to transport the sick and wounded from battle areas. Still others are sent to rescue or recover people from behind enemy lines.

Attack. Helicopters can be armed and used as attack platforms over land or sea. Weapon systems include machine guns, rockets and torpedoes. Sophisticated targeting and guidance systems are used to lock on to and destroy targets at longe range.

Transport. Helicopters of all sizes are used to transport people and supplies over land or sea. Many ships are equipped with helipads to facilitate offshore operations.

The helicopter is used all over the world in a variety of ways (see, for example, figure 1 and figure 2). In addition, it is often working very near the ground and other obstructions. This requires constant vigilance from the pilots and those who work with or ride on the aircraft. By contrast, the fixed-wing aircraft environment is more predictable, since they fly (especially the commercial airplanes) primarily from airports whose airspace is tightly controlled.

Figure 1. H-46 helicopter landing in the Arizona, US, desert. 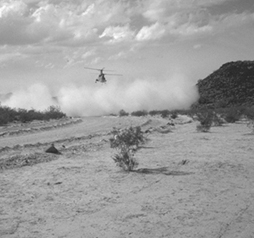 Figure 2.  5-76A Cougar helicopter landing in field at accident site. 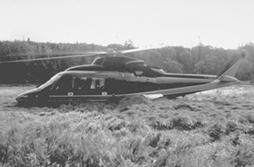 The combat environment presents special dangers. The military helicopter also operates in a low-level environment and is subject to the same hazards. The proliferation of inexpensive, hand-carried, heat-seeking missiles represents another danger to rotorcraft. The military helicopter can use the terrain to hide itself or to mask its telltale signature, but when in the open it is vulnerable to small-arms fire and missiles.

Military forces also use night vision goggles (NVG) to enhance the pilot’s view of the area in low-light conditions. While the NVGs do increase the pilot’s ability to see, they have severe operating limitations. One major drawback is the lack of peripheral vision, which has contributed to mid-air collisions.

Preventive measures can be grouped into several categories. Any one prevention category or item will not, in and of itself, prevent accidents. All of them must be used in concert to maximize their effectiveness.

Operational policies are formulated in advance of any operations. They are usually provided by the company with the operating certificate. They are crafted from governmental regulations, manufacturer’s recommended guidelines, industry standards, best practices and common sense. In general, they have proven to be effective in preventing incidents and accidents and include:

The following are crucial support operations for the safe use of helicopters: