Bus driving is characterized by psychological and physical stresses. Most severe are the stresses of traffic in big cities, because of the heavy traffic and frequent stops. In most transit companies, the drivers must, in addition to driving responsibilities, handle tasks such as selling tickets, observing passenger loading and unloading and providing information to passengers.

Psychological stresses result from the responsibility for the safe transport of passengers, scant opportunity to communicate with colleagues and the time pressure of holding to a fixed schedule. Rotating shift work is also psychologically and physically stressful. Ergonomic shortcomings in the driver’s workstation increase physical stresses.

Numerous studies of the activity of bus drivers have shown that the individual stresses are not great enough to cause an immediate health hazard. But the sum of the stresses and the resulting strain leads to bus drivers having more frequent health problems than other workers. Especially significant are diseases of the stomach and digestive tract, of the motor system (especially the spine) and of the cardiovascular system. This results in drivers often not reaching retirement age, but rather having to quit driving early for health reasons (Beiler and Tränkle 1993; Giesser-Weigt and Schmidt 1989; Haas, Petry and Schühlein 1989; Meifort, Reiners and Schuh 1983; Reimann 1981).

In order to achieve more effective occupational safety in the field of commercial driving, technical as well as organizational measures are necessary. An important work practice is the arranging of shift schedules so that the stress on the drivers is minimized and their personal desires are also taken into account to the extent possible. Informing the personnel of and motivating them to health-conscious conduct (e.g., proper diet, adequate movement within and outside of the workstation) can play an important role in promoting health. An especially necessary technical measure is the ergonomically optimal design of the driver’s workstation. In the past, the requirements of the driver’s workstation were considered only after other requirements, such as design of the passenger area. Ergonomic design of the driver’s workstation is a necessary component of driver safety and health protection. In recent years, research projects on, among other things, the ergonomically optimal driver’s workstation were conducted in Canada, Sweden, Germany and the Netherlands (Canadian Urban Transit Association 1992; Peters et al. 1992; Wallentowitz et al. 1996; Streekvervoer Nederland 1991). The results of the interdisciplinary project in Germany resulted in a new, standardized driver’s workstation (Verband Deutscher Verkehrsunternehmen 1996).

The driver’s workstation in buses is normally designed in the form of a half-open cabin. The measurements of the driver’s cabin and the adjustments that can be made to the seat and steering wheel must fall within a range that is applicable to all drivers. For central Europe, this means a body-size range of 1.58 to 2.00 m. Special proportions, such as being overweight and having long or short limbs, should also be taken into account in the design.

The adjustability and the ways of adjusting the driver’s seat and steering wheel should be coordinated so that all drivers within the design range can find positions for their arms and legs that are comfortable and ergonomically healthy. For this purpose, the optimal seat placement has a back incline about 20°, which is further from the vertical than has previously been the norm in commercial vehicles. Furthermore, the instrument panel should also be adjustable for optimal access to adjustment levers and for good visibility of the instruments. This can be coordinated with the steering wheel adjustment. Using a smaller steering wheel also improves spatial relations. The steering wheel diameter now in general use apparently comes from a time when power steering was not common in buses. See figure 1. 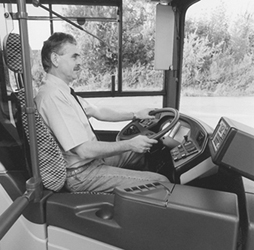 The instrument panel with the controls can be adjusted in coordination with the steering wheel.

Since stumbling and falling are the most common causes of workplace accidents among drivers, particular attention should be paid to the design of the entrance to the driver’s workstation. Anything that can be stumbled on should be avoided. Steps in the entrance area must be of equal height and have adequate step depth.

The driver’s seat should have a total of five adjustments: seat length and height settings, seat back angle, seat bottom angle and seat depth. Adjustable lumbar support is strongly advised. To the extent that it is not already legally required, equipping the driver’s seat with a three-point seat-belt and head rest are recommended. Since experience shows that manually adjusting to the ergonomically right position is time-consuming, in the future some way of electronically storing the adjustment functions listed in table 1 should be used, allowing for quickly and easily refinding the individual seating adjustment (e.g., by entering it onto an electronic card).

** The side upholstering of the seat surface applies only to the recess area.

Stress through whole-body vibrations in the driver’s workstation is low in modern buses compared to other commercial vehicles, and it falls well below the international standards. Experience shows that driver’s seats in buses are often not optimally adjusted to the vehicle’s actual vibration. An optimal adaptation is advised to avoid certain frequency ranges causing an increase in whole-body vibration on the driver, which can interfere with productivity.

Noise levels that are a hazard to hearing are not anticipated in the bus driver’s workstation. High-frequency noise can be irritating and should be eliminated because it could interfere with the drivers’ concentration.

All adjustment and service components in the driver’s workstation should be arranged for comfortable access. A large number of adjustment components are often required due to the amount of equipment added to the vehicle. For this reason, switches should be grouped and consolidated according to use. Frequently used service components such as door openers, bus stop brakes and windshield wipers should be placed in the main access area. Less frequently used switches can be located outside the main access area (e.g., on a side console).

Analyses of visual movements have shown that driving the vehicle in traffic and observing the loading and unloading of passengers at the stops is a serious burden on the driver’s attention. Thus, the information conveyed by instruments and indicator lights in the vehicle should be limited to those absolutely necessary. Vehicle computerized electronics offer the possibility of eliminating numerous instruments and indicator lights, and instead installing a liquid crystal display (LCD) in a central location to convey information, as shown in the instrument panel in figure 2 and figure 3.

Figure 2. View of an instrument panel. 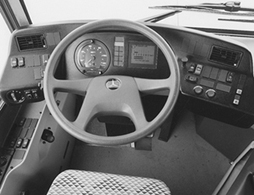 With the exception of the speedometer and a few legally required indicator lights, the functions of the instrument and indicator displays have been assumed by a central LCD display.

Figure 3. Illustration of an instrument panel with legend. 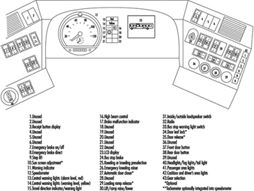 With the proper computer software, the display will show only a selection of information that is needed for the particular situation. In the case of malfunction, a description of the problem and brief instructions in clear text, rather than in difficult-to- understand pictograms, can provide the driver with important assistance. A hierarchy of malfunction notifications can also be established (e.g., “advisory” for less significant malfunctions, “alarm” when the vehicle must be stopped immediately).

Heating systems in buses often heat the interior with warm air only. For real comfort, however, a higher proportion of radiant heat is desirable (e.g., by heating the side walls, whose surface temperature often lies significantly below the interior air temperature). This, for example, can be achieved by circulating warm air through perforated wall surfaces, which thereby will also have the right temperature. Large window surfaces are used in the driver’s area in buses to improve visibility and also for appearance. These can lead to a significant warming of the inside by sun rays. The use of air conditioning is thus advisable.

The air quality of the driver’s cabin depends heavily on the quality of the outside air. Depending on the traffic, high concentrations of harmful substances, such as carbon monoxide and diesel motor emissions, can briefly occur. Providing fresh air from less-used areas, such as the roof instead of the vehicle front, lessens the problem significantly. Fine-particle filters should also be used.

In most transit companies, an important part of the driving personnel’s activity consists of selling tickets, operating devices to provide information to passengers and communicating with the company. Until now, separate devices, located in the available work space and often hard for the driver to reach, have been used for these activities. An integrated design should be sought from the start that arranges the devices in an ergonomically convenient manner in the driver’s area, especially the input keys and display panels.