Tea (Camellia sinensis) was originally cultivated in China, and most of the world’s tea still comes from Asia, with lesser quantities from Africa and South America. Ceylon and India are now the largest producers, but sizeable quantities also come from China, Japan, the former USSR, Indonesia and Pakistan. The Islamic Republic of Iran, Turkey, Viet Nam and Malaysia are small-scale growers. Since the Second World War, the area under tea cultivation in Africa has been expanding rapidly, particularly in Kenya, Mozambique, Congo, Malawi, Uganda and the United Republic of Tanzania. Mauritius, Rwanda, Cameroon, Zambia and Zimbabwe also have small acreages. The main South American producers are Argentina, Brazil and Peru.

Tea is most efficiently and economically produced in large plantations, although it is also grown as a smallholder crop. In Southeast Asia, the tea plantation is a self-contained unit, providing accommodation and all facilities for its workers and their families, each unit forming a virtually closed community. Women form a large proportion of the workers in India and Ceylon, but the pattern is somewhat different in Africa, where mainly male migrant and seasonal labour is employed and families do not have to be housed. See also the article “Plantations” [AGR03AE] in this chapter.

Land is cleared and prepared for new planting, or areas of old, poor-quality tea are uprooted and replanted with high-yielding vegetatively propagated cuttings. New fields take a couple of years to come into full bearing. Regular programmes of manuring, weeding and pesticide application are carried on throughout the year.

The plucking of the young tea leaves—the famous “two leaves and a bud”—takes place the year round in most of Southeast Asia, but is restricted in areas with a marked cold season (see figure 1). After a cycle of plucking which lasts about 3 to 4 years, bushes are pruned back fairly drastically and the area weeded. Hand weeding is now widely giving way to the use of chemical herbicides. The plucked tea is collected in baskets carried on the backs of the pluckers and taken down to centrally located weighing sheds, and from these to the factories for processing. In some countries, notably Japan and the former USSR, mechanical plucking has been carried out with some success, but this requires a reasonably flat terrain and bushes grown in set rows.

Figure 1. Tea pluckers at work on a plantation in Uganda 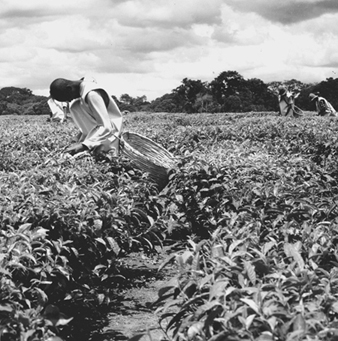 Falls and injuries caused by agricultural implements of the cutting and digging type are the most common types of accidents. This is not unexpected, considering the steep slopes on which tea is generally grown and the type of work involved in the processes of clearing, uprooting and pruning. Apart from exposure to natural hazards like lightning, workers are liable to be bitten by snakes or stung by hornets, spiders, wasps or bees, although highly venomous snakes are seldom found at the high altitudes at which the best tea grows. An allergic condition caused by contact with a certain species of caterpillar has been recorded in Assam, India.

The exposure of workers to ever-increasing quantities of highly toxic pesticides requires careful control. Substitution with less-toxic pesticides and attention to personal hygiene are necessary measures here. Mechanization has been fairly slow, but an increasing number of tractors, powered vehicles and implements are coming into use, with a concomitant increase in accidents from these causes (see figure 2). Well-designed tractors with safety cabs, operated by trained, competent drivers will eliminate many accidents.

Figure 2. Mechanical harvesting on a tea plantation near the Black Sea 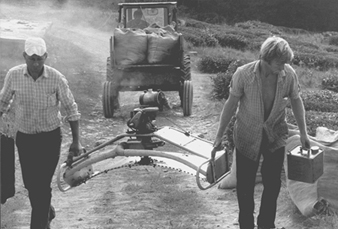 Housing is generally substandard. The most common diseases are those of the respiratory system, closely followed by enteric diseases, anaemia and substandard nutrition. The former are mainly the outcome of working and living conditions at high altitudes and exposure to low temperatures and inclement weather. The intestinal diseases are due to poor sanitation and low standards of hygiene among the labour force. These are mainly preventable conditions, which underlines the need for better sanitary facilities and improved health education. Anaemia, particularly among working mothers of child-bearing age, is all too common; it is partly the result of ankylostomiasis, but is due mainly to protein-deficient diets. However, the principal causes of lost work time are generally from the more minor ailments and not serious diseases. Medical supervision of both housing and working conditions is an essential preventive measure, and official inspection, either at local or national level, is also necessary to ensure that proper health facilities are maintained.

Hops are used in brewing and are commonly grown in the Pacific Northwest of the United States, Europe (especially Germany and the United Kingdom), Australia and New Zealand.

Hops grow from rhizome cuttings of female hop plants. Hop vines grow up to 4.5 to 7.5 m or more during the growing season. These vines are trained to climb up heavy trellis wire or heavy cords. Hops are traditionally spaced 2 m apart in each direction with two cords per plant going to the overhead trellis wire at about 45° angles. Trellises are about 5.5 m high and are made from 10 ´ 10 cm pressure-treated timbers or poles sunk 0.6 to 1 m into the ground.

Manual labour is used to train the vines after the vines reach about a third of a metre in length; additionally, the lowest metre is pruned to allow air circulation to reduce disease development.

Hops vines are harvested in the fall. In the United Kingdom, some hops are grown in trellises 3 m high and harvested with an over-the-row mechanical harvester. In the United States, hop combines are available to harvest 5.5-m-high trellises. The areas that the harvesters (field strippers) are unable to get are harvested by hand with a machete. Newly harvested hops are then kiln dried from 80% moisture to about 10%. Hops are cooled, then baled and taken to cold storage for end use.

Workers need to wear long sleeves and gloves when working near the vines, because hooked hairs of the plant may cause a rash on the skin. Some individuals become more sensitized to the vines than others.

A majority of the injuries involve strains and sprains due to lifting materials such as irrigation pipes and bales, and over-reaching when working on trellises. Workers should be trained in lifting or mechanical aids should be used.

Workers need to wear chaps at the knee and below to protect the leg from cuts while cutting the vines by hand. Eye protection is a must while working with the vines.

Many injuries occur while workers tie twine to the wire trellis wire. Most work is performed while standing on high trailers or platforms on tractors. Accidents have been reduced by providing safety belts or guard rails to prevent falls, and by wearing eye protection. Because there is much movement with the hands, carpal tunnel syndrome may be a problem.

Since hops are often treated with fungicides during the season, proper posting of re-entry intervals is needed.

Worker’s compensation claims in Washington State (US) tend to indicate that injury incidence ranges between 30 and 40 injuries per 100 person years worked. Growers through their association have safety committees that actively work to lower injury rates. Injury rates in Washington are similar to those found in the tree fruit industry and dairy. Highest injury incidence tends to occur in August and September.

The industry has unique practices in the production of the product, where much of the machinery and equipment is locally manufactured. By the vigilance of the safety committees to provide adequate machine guarding, they are able to reduce “caught in” type injuries within the harvesting and processing operations. Training should focus on proper use of knives, PPE and prevention of falls from vehicles and other machines.