The aim of the ISSA is to cooperate, at the international level, in the defence, promotion and development of social security throughout the world, basically through its technical and administrative improvement. The prevention of social risks is today considered to form an integral part of social security.

The concept of prevention already existed in the minds of the CIMAS pioneers when they included this notion in the fundamental policy principles adopted by their Constituent Assembly. It was not until 1954, however, that the Association became actively involved in occupational safety and health activities, through the establishment of its Permanent Committee on Prevention of Occupational Risks. It should be noted that, in this respect, the role of the ISSA is complementary to that of the ILO. The ISSA’s experts may not only be instrumental in bringing about ILO Conventions and Recommendations, but are also called upon to implement them.

Although prevention programmes are obviously most prevalent in the field of occupational safety and health, over the last two decades prevention has gained increasing importance in other branches of social security as well, particularly as regards sickness insurance and, more recently, unemployment insurance, as may be seen from the activities of ISSA Permanent Committees. Over the last decade, activities aimed at preventing employment accidents and occupational diseases have undergone considerable changes in modern industrialized societies, as elaborated below concerning the “Prevention Concept” of the Association.

The ISSA is an international organization of services, institutions or bodies administering one or more branches of social security or mutual benefit societies. It has its offices at the headquarters of the ILO in Geneva.

In 1995 the ISSA had over 240 affiliate member organizations in 117 countries, and 95 associate member institutions in 35 countries, for a total membership of some 338 organizations in 127 countries around the world. More than 200 member institutions are directly involved in insurance against employment accidents and occupational diseases and/or in the prevention of accidents and the promotion of safety and health. 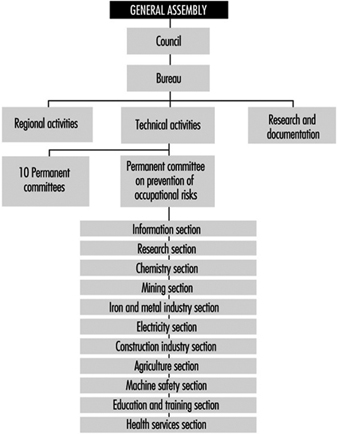 As can be seen from the organigramme (figure 1), all ISSA activities are directed by the General Assembly, which is comprised of delegates appointed by member institutions and is sometimes described as the world parliament of social security. The Council, which consists of one delegate from each country having affiliate member institutions, meets regularly on the occasion of the Association’s triennial General Assemblies. The Bureau, which together with the Council gives effect to the decisions taken by the General Assembly, meets twice a year and is composed of 30 elected members and the Chairpersons of the Permanent Committees.

The Association has three main programmes:

The Permanent Committee on Prevention of Occupational Risks

Two different and complementary aspects (i.e., promotional activities related to prevention, and technical activities) fall within the scope of competence of this Committee, which together with its Advisory Council monitors worldwide developments and undertakes surveys and studies on overall problem areas.

The Committee is charged with undertaking at the international level the following types of activities for the prevention of occupational risks:

Since 1955 the ILO and the ISSA have organized triennial World Congresses on Occupational Safety and Health in cooperation with the ISSA member institutions and ILO constituents concerned in the host country. It is not easy to quantify the extent to which the World Congresses have kept pace with the different stages of development in the prevention of occupational risks coinciding with the social, economic and industrial progress of the past 25 years, or the extent to which they have given a lead to or encouraged this development. There is no doubt however that the resultant exchange of ideas and information relating to recent research and to its practical application in different countries, both at the national level and within industry, has enabled a large number of participants in these Congresses to be cognizant of the many changes being introduced. This, in turn, has enabled them to make a greater contribution to their particular field of activity.

The International Sections are financially autonomous, having a decentralized structure and their own membership consisting of full members, associate members and corresponding members. Full membership is open to ISSA member institutions and other non-profit organizations; profit-making entities with activities compatible with the area of competence of a Section may be admitted as associate members, and individual experts may apply for corresponding membership. The Secretariats of the Sections are provided in various countries by member institutions of the ISSA specialized in the respective fields.

Each Section is a clearing house for information in its own area of competence. All Sections organize international symposia, round tables and expert meetings, the proceedings and reports of which are published in the ISSA Prevention Series 1000. The Sections currently have some 45 internationally composed working groups working on specific topical subjects, which range, for example, from safety advice for migrant workers in the construction industry or a checklist for the classification of machines on the basis of ergonomic principles, to safe working with biological agents. The findings of these working groups are published as technical brochures in the ISSA Prevention Series 2000. Most titles exist in English, French and German, some also in Spanish and other languages. Such publications may be ordered directly from the Secretariat of the Section concerned.

Of special interest are the International Film and Video Festivals, which are held during World Congresses and for which a Working Group of the Electricity Section forms a clearing house. All productions submitted to these festivals are listed in a catalogue in four languages which is available free from this Section.

A brief description of each of the ISSA International Sections follows.

The Section offers the latest information on both current and planned research projects worldwide. Two data banks allow quick and efficient access to this information. The Working Group “Research Concepts” promotes the necessary theoretical bases to effectively ensure that more than in the past research further serves both the field and the more practical implementation of research results.

The Information Section provides information on efficient information techniques. The Working Group “Safety and Health Periodicals” informs safety experts on the most effective way to reach their audience. The Section offers expert advice on “advertising for safety”.

The Section deals with the classical risks of underground work in coal mines (darkness, dust, heat, gases, explosions, cave-ins) and concerns itself with the training of mine rescue teams.

Although new substances result in new risks, the chemical industry has developed high safety standards that have proven to be exemplary. The Chemical Section strives to ensure that these safety standards transcend borders just as much as—if not even more than—risks do.

ISSA International Section for the Iron and Metal Industry.

The high accident rate in this important branch of activity must be reduced. Safety strategies are developed against the most frequent hazards and causes of accident. The Section’s Working Groups are primarily concerned with new technologies and substitutes for dangerous working substances.

“Invisible” energy generates many invisible risks. The Section evolves recommendations for practical accident prevention, principles for a regulatory control of electrical appliances and systems, backed up by effective first aid measures in the event of electrical accidents. The Section maintains a clearinghouse for films and videos in the field of safety, health and the environment.

The extremely high accident risks in the construction industry call for a safety strategy that can deal with the continuous changes of the working environment on construction sites. The Section’s aim is not only to solve individual problems, but to increase safety and accident prevention in construction industry operations overall, especially by intensified cooperation between the various trades working on the same site.

The mechanization of agriculture and the use of chemical substances in agriculture are worldwide problems. The Section advocates a rapid socio-technical evolution in the light of the technical revolution, while endeavouring to ensure that the production of food does not put life at risk.

The Section deals with system safety and accident prevention relating to machines, appliances, apparatus and systems. Standardization of safety appliances, ergonomic questions, noise reduction, safety switches and the prevention of dust explosions are focal points of the Section’s Working Groups.

The Section endeavours through international cooperation to overcome the safety deficits in the health sector. The health sector has typical professional risks which in part differ greatly from those in other fields of activity—for instance, direct exposure to diseases, risks from medications, particularly gas anaesthetics, disinfectants and infectious waste.

Because only seven out of every 100 fatal accidents are work accidents, with all others occurring in traffic, in the home, during sports or at school, the concept seeks to make meaningful use, in other areas, of the experience gained in prevention in the world of work.

Starting from the viewpoint that the preservation of health is a fundamental mission of humanity and thus a central aim of social security, the concept calls for the interlinking of prevention, rehabilitation and compensation and for the preservation of an intact environment. Emphasis will be laid on the human factor at the planning, organization and implementation stages and the need to begin education in prevention during early childhood. Efforts will be made to address all those who, through their own activities, can provide better protection against hazards for individuals. These include legislators and standard-setters, social partners, persons responsible for developing, planning, designing and manufacturing products and services, and school curriculum planners and teachers, as well as information specialists in public information work, occupational health physicians, supervisory and consultative bodies, responsible officials in social and private insurance, decision-makers and programme managers in international organizations, professional and other organizations and so on—and, last but not least, parents and children.

The thorough promotion of safety and health at work and elsewhere requires measures of three types—technical measures, behavioural change measures and organizational measures. To this end, the ISSA’s prevention concept defines three levels of intervention:

The first step in the implementation of the concept will be a stock-taking of prevention activities to determine regional needs and deficiencies. An inventory of existing support facilities and materials will also be drawn up. In addition, the ISSA will step up its information and research activities and its programme of meetings, strengthen cooperation with international organizations active in the prevention field, and take their projects into account in its own activities.

In summary, the only sure way to success lies in cooperation between prevention, rehabilitation and compensation services; the positive experiences of prevention within enterprises must be carried over into non-occupational fields; and greater account must be taken of the human factor.

The ISSA issues a whole range of periodical and non-periodical publications, studies, surveys, newsletters and bulletins; further information concerning them is contained in the ISSA Catalogue of Publications, which may be ordered free of charge at the following address: ISSA, Case postale 1, CH-1211 Geneva 22, Switzerland.

In addition to the proceedings of World Congresses on Occupational Safety and Health, which are published by the National Organizing Committee of the host country, the publications issued by the International Sections are listed in the ISSA Prevention Series 1000 and 2000, and are also available at the above address.

More in this category: « International Organization for Standardization (ISO) The International Commission on Occupational Health (ICOH) »
back to top