Planting machines. These include planters, drills, broadcast seeders and so on and are designed to take seeds from a hopper or bin and insert them in the soil at a predetermined depth and spacing or spread them uniformly over the ground. Planters may be of simple design and comprise a single-row seeding mechanism, or they may be highly complex (as is the case with the multi-row planter with attachments that simultaneously add fertilizer, pesticides and herbicides).

Cultivating machines. These include rotary hoes, cultivators, weeders (mechanical and flame) and so on. They are used to eradicate undesirable weeds or grasses which compete with the plant for soil moisture and make the harvest of the crop more difficult. They also improve the soil tillage so as to make it more absorptive of rain.

Forage harvesting machines. These include mowers, choppers, balers and so on and are designed to sever the stems of roughage crops from their roots and prepare them for storage or immediate use. The machines also vary in their complexity: the simple mower merely cuts the crop, whereas the chopper will not only separate the stalk from the root but will also chop the entire plant into small pieces and load it into a vehicle, which may be a towed wagon. Crimpers, which crush or break the stems of plants, are often used to expedite the field-drying process of fodder crops to prevent spoilage, especially of legumes that will be placed in dry storage or baled. Pelleting machines are used to compress fodder crops into compact cubes for mechanical feeding of livestock. Balers are used to compress fodder into square or round bales to facilitate storage and handling. Some bales are small enough (20 to 40 kg) to handle manually, while others may be so large (400 to 500 kg) as to require mechanical handling systems.

Grain and fibre harvesting machines. These include reapers, binders, corn pickers, combines, threshers and so on. They are used to remove the ripe grain or fibre from the plant and place it in a bin or bag for transport to the storage area. Grain harvesting may involve the use of a number of machines, such as a reaper or binder to cut the standing grain, a wagon or truck to transport the crop to the threshing or separating machines and vehicles to transport the grain to a storage area. In other cases many of these functions may be performed by a single machine, the combine harvester (figure 1), which cuts the standing grain, separates it from the stalk, cleans it and collects it in a bin, all while moving through the field. Such machines will also load the grain into transport vehicles. Some machines such as cotton pickers and corn pickers may operate selectively and remove only the grain or fibre boll from the stem or stalk.

Figure 1. Combine for harvesting wheat without an enclosed cabin. 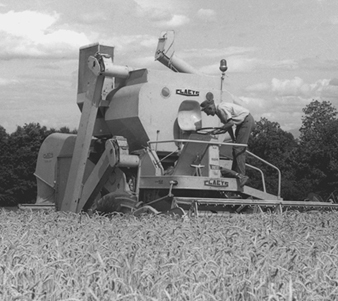 Vegetable harvesting machines. These include diggers and lifters, and are designed either to dig the crops from the earth and separate them from the soil or to lift or pull the plant free. The potato digger, for example, may form part of a potato combine comprising a sorting, grading device, polisher, bagger and elevator. At the other extreme is the simple two-wheeled, bladed sugar-beet lifter which is followed by hand labourers.

Fruit and nut harvesting machines. These machines are used to harvest berries, fruit and nuts. They may be as simple as a tractor-mounted, vibrating tree shaker which separates the ripe fruit from the tree. Or they may be as complex as the ones which harvest the fruit, catch the falling fruit, place it in a storage container and later transfer it to transport vehicles.

Transport and elevating machines. These also vary considerably in size and complexity ranging, for example, from a simple wagon comprising merely a platform on wheels to a self-loading and stacking transport unit. Inclined chain, flight or belt conveyors or other mechanical handling devices are used to move bulky material (hay, straw, ear corn and so on) from wagon to storage or from one location in a building to another. Screw conveyors are used to move granular material and grain from one level to another, and blowers or pneumatic conveyors are used to move light materials horizontally or vertically.

Agricultural chemical applicators. These are used to apply fertilizers to stimulate plant growth or herbicides and pesticides to control weeds and pests. The chemicals may be liquid, powdered or granular, and the applicator distributes them either by pressure through a nozzle or by centrifugal force. Applicators may be portable or vehicle-mounted; the use of aircraft for chemical application is growing rapidly.

Sorting and packaging machines. These machines are usually stationary. They may be as simple as a fanning mill, which grades and cleans grain merely by passing it over a series of screens, or as complex as a seed mill, which will not only grade and clean but also, for example, separate different types of seeds. Packaging machines usually form part of a sophisticated grading system. They are used primarily for fruit and vegetables and may wrap the produce in paper, bag it or insert it into a plastic container.

Power plants. Electric motors may be used to drive stationary equipment permanently located near a mains supply; however, since many agricultural machines are mobile and must operate in remote areas, they are usually powered by an integral petrol engine or by a separate engine such as that of a tractor. Power from a tractor may be transmitted to the machine via belt, chain, gear or shaft drives; most tractors are fitted with a power take-off coupling specially designed for this purpose.

More in this category: « Mechanization
back to top