It is thought that the word coffee derives from Kaffa, a village in Ethiopia where the plant is thought to have its origin. Some, however, consider that the word stems from qahwa, meaning wine in Arabic. Coffee cultivation spread the world over, starting in Arabia (one species is called Coffea arabica, and a variety is Moka, named after an Arab village), passing through many countries, such as Ceylon, Java, India, the Philippines, Hawaii and Viet Nam, among others, some of which are important producers to this day. In America, coffee was introduced from plants previously adapted to the climate in Amsterdam and Paris, planted in Martinique, Surinam and French Guyana, from where it was brought to Brazil, the largest producing country in the world.

World production may be estimated from figure 1. The 1995–96 crop generated wealth estimated at approximately US$27 million, indicating the economic significance of this product worldwide. 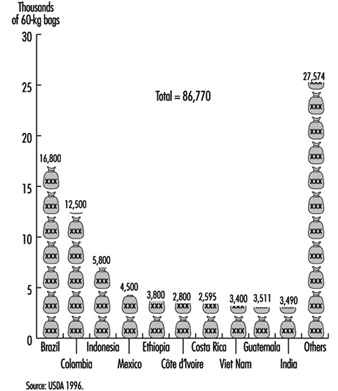 The trend towards a global economy, growing competition and the search for technologies with higher productivity also have effects upon coffee cultivation. Mechanization is being disseminated and updated. Moreover, new methods of cultivation are introduced, among them high-density cultivation, in which the distance between plants is being reduced. This modern method increases the number of coffee trees from 3,000 or 4,000 to 100,000 plants per hectare, with an increase in productivity of around 50% over the traditional method. This procedure is important for workers’ health, since lower risks are involved and less herbicide is applied, especially after the third year. On the other hand, there is an increase in the frequency of tree cutting and higher demand for control of fungus disease in the plants.

It is extremely difficult to obtain a reliable estimate of the total labour force involved in coffee cultivation because the number of employed workers is quite variable. During harvest, a large number of seasonal workers are hired, to be dismissed soon after the crop is over. Moreover, in small properties, very often workers are not legally registered, and therefore are not shown in official reports. In Brazil in 1993, for a production of 28.5 million coffee bags, the number of workers was estimated at 1.1 million in direct and 4 to 5 million in indirect jobs. If the same parameters are applied to world production for the same year, coffee workers around the world could be estimated at approximately 3.6 million.

It is equally difficult to know the average figure of workers per rural property. In general, small or medium-sized properties are predominant. The sex and age distribution of the working population is equally unknown, even though female population among workers is increasing and children are known to be employed in coffee plantations. Figures for unionized workers vary according to the labour policies in each country, but they are known to be generally scarce.

Risk factors that may affect workers’ health in coffee cultivation are the same as for agricultural workers in general.

From tree abatement and terrain preparation to the final storage of coffee bags, each step may involve several risk factors for workers’ health and safety. Injury risks are present mainly in mechanized processes, tree abatement, terrain preparation, mechanical picking, transportation of coffee and workers as well, fruit treatment (including the risk of boiler explosion) and use of hand tools (very often improvised or without maintenance).

Potential risks of occupational diseases due to physical conditions are related to heat exposure in drying operations, solar radiation, machine noise, ergonomic problems from hand tools, vibration from machinery and tractors, and cold and humidity from outdoor exposure.

The main chemical agents present as potential risks for workers’ health are pesticides and herbicides. Those most often used are gliphosate as an herbicide, copper salts as fungicides and organophosphorus compounds for other pests commonly found on coffee trees. The number of pesticide applications varies according to tree age, soil composition, climatic conditions, vegetation species or variety, cultivation system (e.g., high or low density) and other factors. Spraying is usually done individually with backpack equipment, or from tractors. Large amounts are usually required, and it is said that “without spraying no crop is available”.

Chemical fertilizers may also present a health risk. Often used are compounds derived from boron, zinc, nitrogen, sodium, potassium, calcium, magnesium and sulphur. The release of particles from fertilizer handling should be kept under control.

Biological agents may represent important risks for workers’ health. They may include, for instance, bites or stings from snakes, spiders, bees, mosquitoes and acarids, some of them important as disease vectors. In certain areas, endemic diseases may be serious risks for coffee workers.

Ergonomic, psychosocial and organizational factors are discussed below.

Examples of injuries related to work are cuts from hand tools, sprains and fractures from machines and injuries from tractors. Fatal injuries, even if unusual, have occurred as a result of overturning of tractors or inadequate vehicles used in transportation of workers. When artificial drying is employed, heat sources may cause burns and explosions.

Occupational diseases may result from exposure to solar ultraviolet radiation; cutaneous conditions may range from a simple erythema to skin cancer. Hearing loss among machine operators, pulmonary allergic conditions, poisoning from herbicides and pesticides, callosities, lung diseases, bone and circulatory conditions due to vibration, and muscular and skeletal trouble due to poor ergonomic positions or excessive weight (one coffee bag can weigh 60 kg) are other occupational conditions that may occur among coffee cultivation workers. Although primarily a problem among workers processing coffee beans, green bean handlers have complained of respiratory and eye problems. Coffee bean dust has been associated with occupational dust diseases.

Tropical diseases such as malaria, yellow fever, filariasis, trypanossomiasis, leishmaniasis and onchocercosis are prevalent in certain cultivating areas. Tetanus is still prevalent in many rural areas.

More complex health problems related to psychosocial and organizational factors may also affect coffee workers. Since large numbers of workers are required during harvest, and very few during the rest of the year, seasonal contracts are usually practised, often resulting in difficult health problems.

In many cases, workers leave their families and remain during the harvest season in precarious lodgings under inadequate sanitary conditions. If the planting area is close to town, the farmer will contract only one man in the family. However, to increase the profit, the worker himself may bring his whole family to help, including women and children. In some areas, the number of children at work is so high that schools will be closed during the whole harvest season.

In this type of seasonal activity, workers will turn from one type of cultivation to another, according to each harvest period. Since men leave their families, women are called “widows with living husbands”. Very often, a man will raise another family, away from his original town.

Proper compliance with labour legislation and social security is usually restricted to large plantations, and labour inspection in rural areas is generally ineffective. Health care is usually very limited. Duration of work is extended to many hours daily; weekends and normal vacations are seldom respected.

These psychosocial and organizational factors result in marked deterioration in workers’ health, manifested through early ageing, low life expectancy, increase in prevalence and longer duration of diseases, malnutrition (eating the food taken to the field in cans without heating it has led to workers being given a nickname—boias frias in Portuguese), anaemia and hypovitaminoses leading to loss of disposition to work, mental trouble and other manifestations.

Preventive measures concerning coffee are the same that apply to rural work in general. Collective protection includes machine guarding, care in application of pesticides and herbicides, mechanizing operations that require undue effort and energy consumption, and adequate transportation of workers. In high-density plantations, regular cutting will not allow the trees to grow, which will eliminate the use of dangerous and uncomfortable ladders for hand picking. When drying requires the use of boilers, careful periodic preventive maintenance is of utmost importance. Biological pest control and proper selection of species resistant to plagues are important preventive measures concerning pesticides, avoiding workers’ disease and environmental protection as well.

Implementation of the use of recommended PPE is difficult because such equipment is usually not adapted to climatic conditions or to the biotype of workers. Moreover, there is usually no educational orientation to facilitate the use, and the selection of equipment is not always correct. Equipment in general use is restricted to boots, hats and clothing to protect from the weather, even though hand, lung, eye and ear protection may be required.

Prevention to control psychosocial and organizational factors may bring up many difficulties. Workers’ awareness should be raised through educational activities, especially in unions and other workers’ organizations, increasing perceptions about workers’ rights to better living and working conditions; moreover, employers should develop their perceptions concerning their social responsibilities towards the labour force. The State should exercise an effective and constant orientation and enforcement wherever legal action is required. Some countries have developed rules and regulations specifically applicable to rural workers. In Brazil, for example, Rural Regulatory Standards establish general directives concerning safety in rural activities, the organization of occupational health services and safety committees in plantations, use of personal protective equipment and handling of chemicals (pesticides, fertilizers and soil-correcting products).

Health control through occupational medicine should cover the evaluation of health effects due to exposure to pesticides, ultraviolet radiation, excessive noise and many other hazards. It may, in many circumstances, be more necessary to control worm diseases, anaemia, hypertension, behavioural problems, eye defects and similar problems, due to their high prevalence in rural areas. Health education should be stressed, as well as tetanus immunization, including for pregnant workers to prevent neonatal tetanus. In some regions, immunization against yellow fever is necessary. Chemoprophylaxis is recommended in areas where malaria is endemic, together with the use of repellents and a preventive orientation against mosquitoes, until sanitation is adequate to control or suppress vectors of the aetiological agent. Serum against snake poison should be available.

Acknowledgement: The authors are obliged to the cooperation received from Professor Nelson Batista Martin, from the Institute of Rural Economy, State Secretary of Agriculture, Sao Paulo; Andre Nasser and Ricardo Luiz Zucas, from the Brazilian Rural Society; and Monica Levy Costa, from the School Health Center, School of Public Health, Sao Paulo University.

More in this category: « General Profile Case Study: Family Farms »
back to top