The lumber industry is a major natural resource-based industry around the world. Trees are harvested, for a variety of purposes, in the majority of countries. This chapter focuses on the processing of wood in order to produce solid wood boards and manufactured boards in sawmills and related settings. The term manufactured boards is used to refer to lumber composed of wood elements of varying sizes, from veneers down to fibres, which are held together by either additive chemical adhesives or “natural” chemical bonds. The relationship between the various types of manufactured boards is displayed in figure 1. Because of differences in process and associated hazards, manufactured boards are divided here into three categories: plywood, particleboard and fibreboard. The term particleboard is used to refer to any sheet material manufactured from small pieces of wood such as chips, flakes, splinters, strands or shreds, while the term fibreboard is used for all panels produced from wood fibres, including hardboard, medium-density fibreboard (MDF) and insulation board. The other major industrial use for wood is the manufacture of paper and related products, which is covered in the chapter Pulp and paper industry. 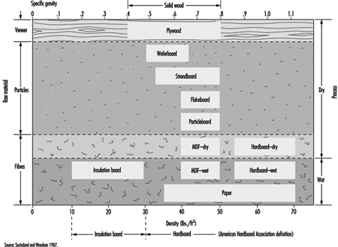 Solid wood and manufactured boards may be produced from a wide variety of tree species. Species are selected on the basis of the shape and size of the tree, the physical characteristics of the wood itself, such as strength or resistance to decay, and the aesthetic qualities of the wood. Hardwood is the common name given to broad-leaved trees, which are classified botanically as angiosperms, while softwood is the common name given to conifers, which are classified botanically as gymnosperms. Many hardwoods and some softwoods which grow in tropical regions are commonly referred to as tropical or exotic woods. Although the majority of wood harvested worldwide (58% by volume) is from non-conifers, much of this is consumed as fuel, so that the majority used for industrial purposes (69%) is from conifers (FAO 1993). This may in part reflect the distribution of forests in relation to industrial development. The largest softwood forests are located in the northern regions of North America, Europe and Asia, while the major hardwood forests are located in both tropical and temperate regions.

Almost all wood destined for use in the manufacture of wood products and structures is first processed in sawmills. Thus, sawmills exist in all regions of the world where wood is used for industrial purposes. Table 1 presents 1990 statistics regarding the volume of wood harvested for fuel and industrial purposes in the major wood-producing countries on each continent, as well as volumes harvested for saw and veneer logs, a sub-category of industrial wood and the raw material for the industries described in this chapter. In developed countries the majority of wood harvested is used for industrial purposes, which includes wood used for saw and veneer logs, pulpwood, chips, particles and residues. In 1990, three countries—the United States, the former USSR and Canada - produced over half of the world’s total industrial wood as well as over half of the logs destined for saw and veneer mills. However, in many of the developing countries in Asia, Africa and South America the majority of wood harvested is used for fuel.

Table 2. Estimated production of lumber by sector for the 10 largest world producers (1,000 m3)

The proportion of workers in the entire workforce employed in wood products industries is generally 1% or less, even in countries with a large forest industry, such as the United States (0.6%), Canada (0.9%), Sweden (0.8%), Finland (1.2%), Malaysia (0.4%), Indonesia (1.4%) and Brazil (0.4%) (ILO 1993). While some sawmills may be located near urban areas, most tend to be located near the forests that supply their logs, and many are located in small, often isolated communities where they may be the only major source of employment and the most important component of the local economy.

Hundreds of thousands of workers are employed in the lumber industry worldwide, although exact international figures are difficult to estimate. In the United States in 1987 there were 180,000 sawmill and planer mill workers, 59,000 plywood workers and 18,000 workers employed in the production of particleboard and fibreboard (Bureau of the Census 1987). In Canada in 1991 there were 68,400 sawmill and planer mill workers and 8,500 plywood workers (Statistics Canada 1993). Even though wood production is increasing, the number of sawmill workers is decreasing due to mechanization and automation. The number of sawmill and planer mill workers in the United States was 17% higher in 1977 than in 1987, and in Canada there were 13% more in 1986 than in 1991. Similar reductions have been observed in other countries, such as Sweden, where smaller, less efficient operations are being eliminated in favour of mills with much larger capacities and modern equipment. The majority of jobs eliminated have been lower-skilled jobs, such as those involving the manual sorting or feeding of lumber.

More in this category: Major Sectors and Processes: Occupational Hazards and Controls »
back to top

Bureau of the Census. 1987. 1987 Census of Manufacturers. Washington, DC: US Department of Commerce.

Howard, B. 1995. Fatal Claims in Sawmills. Analysis of Causes and Costs from 1985-1994. Vancouver: Prevention Division, Workers Compensation Board of British Columbia.