Oceans, lakes, rivers and other large bodies of water present extremes of environmental conditions demanding the maximum in human performance. The defining attribute that characterizes health and safety hazards of maritime rescues is the pervasive presence of the water itself.

Maritime rescues share many of the health and safety hazards experienced in land-based rescues. The risk of communicable disease transmission, exposure to toxic substances, threat of interpersonal violence and exposure to various physical agents (e.g., noise, vibration, radiation) are examples of commonly shared hazards of water and land rescues. The maritime environment, however, presents several unique or exaggerated hazards compared to the land-based environment. This article will focus on those health and safety hazards most identified with at-sea rescues.

Before discussing specific health and safety hazards it is important to understand that maritime rescues can take place by either surface vessel or aircraft, or a combination of both. The importance of understanding the mode of response is that characteristics of hazard exposure are determined, in part, by the mode.

Surface vessels typically used in maritime rescues travel at speeds under 40 knots (74.1 km/h), have a relatively limited operational range (under 200 miles (320 km)), are heavily influenced by water surface and weather conditions, are subject to damage by floating debris and generally are not sensitive to weight consideration. Helicopters, the most commonly used aircraft in maritime rescue, can travel in excess of 150 knots (278 km/h), may have an effective operational range of 300 miles (480 km) (more with in-flight refuelling), are more influenced by weather than water conditions and are very sensitive to weight concerns. 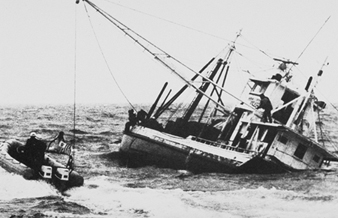 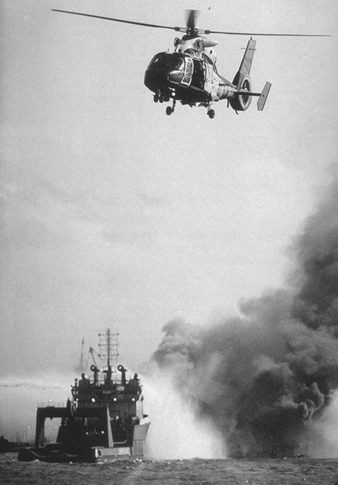 The dominant hazards of maritime rescues are those intrinsic to the watery environment. Rescue personnel are directly exposed to maritime elements and must be prepared for survival themselves.

Drowning is the most common cause of occupation-related death in the maritime environment. People require specialized flotation equipment to survive in water for any length of time. Even the best swimmers require flotation assistance to survive in rough weather. Prolonged (more that several hours) survival in stormy weather is usually impossible without specialized survival suits or rafts. Injuries, reduced level of consciousness, confusion and panic or uncontrolled fear will reduce the likelihood of water survival.

Water is more efficient than air at conducting away body heat. The risk of death due to hypothermia or hypothermia-induced drowning increases rapidly as water temperature decreases below 24 °C. As water temperatures approach freezing, effective survival time is measured in minutes. Prolonged survival in cold water, even when the surface is calm, is possible only with the assistance of specialized survival suits or rafts.

The maritime environment exhibits the extremes of weather conditions. Wind, rain, fog, snow and icing can be severe. Visibility and the ability to communicate can be seriously restricted. Rescuers are constantly at risk for getting wet through wave and splash action, wind-driven rain or spray, and vessel- or aircraft-generated spray. Water, especially salt water, can damage mechanical and electrical equipment essential for vessel or flight operations.

Exposure to salt water can result in skin, mucosal and eye irritation. Ingestion of water-borne infectious micro-organisms (e.g., Vibrio spp.) increases the likelihood of gastro-intestinal disease. The water around rescue sites can be contaminated with pollutants (e.g., sewage) or substances hazardous to human health (e.g., petroleum products). Potential envenomation by water snakes and by various coelenterates (e.g., jellyfish) can occur in areas supporting these organisms. Water and thermal protective clothing is often cumbersome, restrictive and prone to promote heat stress. During sunny conditions, rescuers can experience skin and eye damage due to reflected ultraviolet light.

The surface of large bodies of water, such as the oceans, typically has undulant wave motion with coexistent surface chop. Rescue personnel, therefore, conduct work on a moving platform, which complicates any movement or procedures. Motion sickness is a constant threat. Surface vessels travelling through rough conditions can experience severe pounding and instability which promotes fatigue, an increased likelihood of falls or being struck by falling objects and equipment failure. Aircraft operating in stormy weather experience turbulence that can induce motion sickness, accelerate fatigue and compound the risks of surface-to-air evacuation.

The maritime environment can be extremely hostile. However, the health and safety hazards associated with maritime rescues can be controlled or minimized through careful planning and prevention efforts. Safe and effective rescues can take place.

Rescue organizations must be acutely aware of the nature of the maritime environment, understand the operational characteristics and limitations of response equipment and personnel, practice system safety and provide suitable equipment, training and leadership. Rescue personnel must be in good physical and mental condition, know their equipment and procedures, stay alert, be prepared, remain proficient and understand the specifics of the situation they are dealing with.

Rescue personnel can be involved in vessel or aviation mishaps. The difference between being a rescuer and needing to be rescued can be only a matter of moments. Ultimate mishap survival is dependent on:

Each stage of mishap survival has its own set of necessary training, equipment, ergonomics and procedures to maximize survival. Maritime rescue personnel usually act in isolation, without immediate backup, and often at long distances from shore. A rule of thumb is for rescuers to have the necessary resources to survive the time it takes to be rescued themselves in the event of their own mishap. Rescuers need to be trained, equipped and prepared to survive in the worst of conditions.

More in this category: « Armed Forces Paramedical Personnel and Ambulance Attendants »
back to top

National Institute for Occupational Safety and Health (NIOSH). 1989. A Curriculum Guide for Public-safety and Emergency Response Workers. Prevention of Transmission of Human Immunodeficiency Virus and Hepatitus B Virus. Cincinnati: NIOSH.